The ECG Bulletin Editors
ECG Bulletin January 2015
The atmospheric concentrations of the main greenhouse gases – carbon dioxide (CO2), methane (CH4), and nitrous oxide (N2O) – continued to rise in 2013 and were at 142%, 253%, and 121% of preindustrial levels (before 1750) by the end of 2013. This is one of the conclusions of the latest WMO Greenhouse Gas Bulletin, published on 9 September 2014 (1). Now in its tenth year, the Greenhouse Gas Bulletin reports global observations of long-lived greenhouse gases. Carbon dioxide contributes around 65% to the overall radiative forcing by long-lived greenhouse gases (2). Between 2012 and 2013, the increase was the largest year-to-year increase in thirty years. The reasons for this larger-than-average increase remain unclear. The report concludes, however, that increased emissions from fossil fuel burning cannot explain the rise and that changes in the exchange of CO2 between the atmosphere and the terrestrial biosphere from one year to the next provide a possible explanation.
The two other greenhouse gases that are discussed in detail are methane, which contributes 17% to the overall radiative forcing by long-lived greenhouse gases, and nitrous oxide, which contributes 6%. Both have anthropogenic as well as natural sources, although for methane, anthropogenic emissions currently exceed natural ones. Recent methane increases after a near-zero growth rate between 1999 and 2006 have continued in 2013 and are attributed to rising emissions from tropical wetlands and from mid-latitude anthropogenic sources.
Other greenhouse gases include the electrical insulator sulphur hexafluoride (SF6), an extremely potent greenhouse gas with a very long atmospheric lifetime. Although its contribution to greenhouse gas forcing is comparatively small, SF6 data can help to evaluate the accuracy of emissions reporting and to validate chemical transport models. Finally, chlorofluorocarbon and related compounds contribute 12% to radiative forcing by long-lived greenhouse gases.
For the first time, the Greenhouse Gas Bulletin includes a section on ocean acidification. The ocean takes up around a quarter of anthropogenic emissions, measurably increasing the acidity of surface waters at measuring sites around the world’s oceans. As a result, the ocean’s capacity for taking up more carbon dioxide is reduced. The impacts of ocean acidification on marine organisms, particularly calcifying organisms, are likely to be complex and are not yet well understood. Only a few marine stations currently conduct carbon dioxide measurements over long time scales, greatly limiting the ability to understand the impacts of carbon dioxide uptake on ocean chemistry.​​ 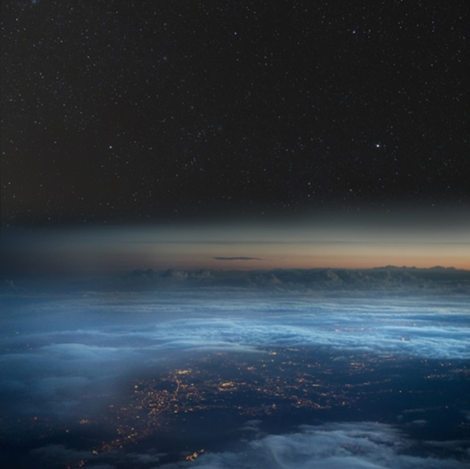 High altitude view of the earth at night. As the latest WMO Greenhouse Gas Bulletin shows, greenhouse gas concentrations in the atmosphere continue to rise. The WMO publication also contains a section on ocean acidification as a result of rising atmospheric carbon dioxide concentrations. Credit: Marcel Clemens / Shutterstock
References
1. WMO Greenhouse Gas Bulletin (GHG Bulletin) No 10: The State of Greenhouse Gases in the Atmosphere Based on Global Observations through 2013, available at library.wmo.int.
2. According to the IPCC, “Radiative forcing is a measure of the influence a factor has in altering the balance of incoming and outgoing energy in the Earth-atmosphere system and is an index of the importance of the factor as a potential climate change mechanism.” Radiative forcing values typically refer to changes relative to preindustrial conditions at 1750. The units are Watts per square meter (W/m2). See: http://www.ipcc.ch/pdf/assessment-report/ar4/syr/ar4_syr.pdf.