Célia M. Manaia
Universidade Católica Portuguesa, CBQF – Centro de Bio-tecnologia e Química Fina – Laboratório Associado, Escola Superior de Bio-tecnologia, Porto, Portugal
cmanaia@porto.ucp.pt
ECG Bulletin July 2018
view and download slides
Antibiotic resistance is a human health issue, the consequence of our failure to treat simple bacterial infections. Antibiotic resistance has been disseminated into the environment, and is now a source of biological pollution. Current state-of-the-art research has revealed the most important sources of antibiotic resistance contamination, and provides some suggestions of how it can be controlled.

There are still important uncertainties regarding the human health risks associated with antibiotic resistance. These are due to the complexity of the problem and may be addressed with further research and worldwide surveillance. Until then, it is recommended that the precautionary principle is applied to any activity or source that may contribute to the environmental propagation of antibiotic resistance.

Over the last 80 years of regular and intensive antibiotic use, antibiotic resistance has been delivered back to the natural environment, and is now a contaminant of great concern. Instead of just being found in strictly environmental bacteria, contaminant antibiotic resistance has become a property of new bacterial hosts, mainly human and animal commensal bacteria and pathogens. These antibiotic resistant bacteria can now be found everywhere, not only in healthy human and animal microbiomes (the whole set of microorganisms inhabiting a given place), but also in the environment, mainly in areas subjected to human activities. The primary sources of antibiotic resistant bacteria are hospital and household sewage and animal production facilities, where antibiotics can be used to promote growth (a practice banned in the European Union in 2006) or to treat infections (9). The impact of these sources on the dissemination of antibiotic resistance varies according to the degree to which good-practices and sanitation are implemented, among other factors (10, 11). Ensuring the availability and sustainable management of water and sanitation is the 6th Sustainable Development Goal proposed by the United Nations (12). In 2015, only 39% of the global population (2.9 billion) used a safely managed sanitation service (13). 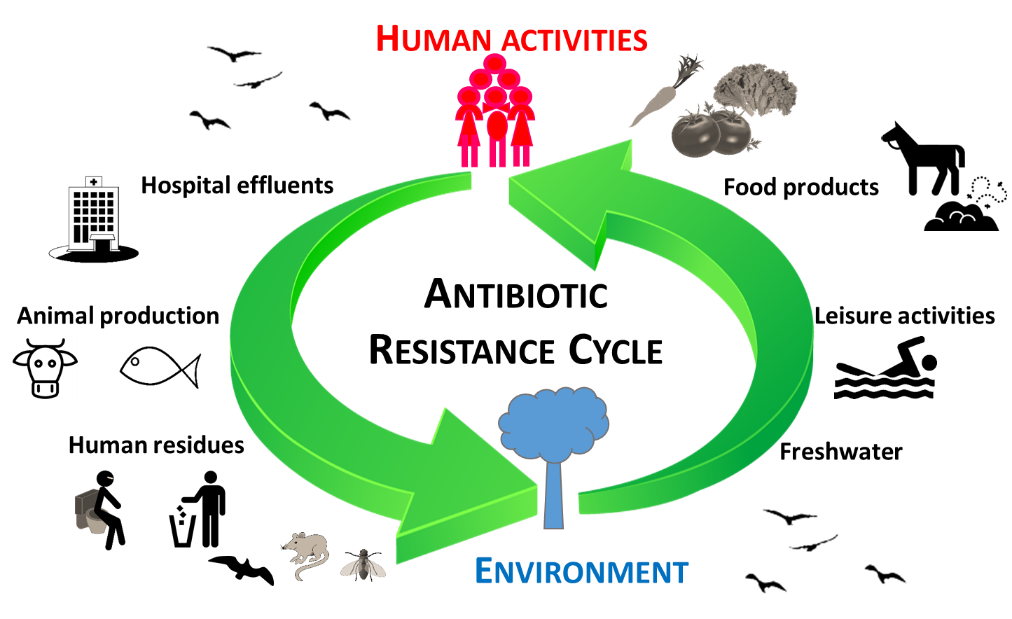