Fuels, chemicals and materials from waste

Paul T. Williams
Energy Research Institute, University of Leeds, Leeds LS2 9JT, UK
p.t.williams@leeds.ac.uk
ECG Bulletin July 2012
In the UK, 288.5 million tonnes of waste are produced each year (Figure 1). For the European Union (EU-27), the waste generation figures are even more astonishing at 2.62 billion tonnes per year. Management of these wastes is often through landfill and incineration and low level mechanical recycling. However, such enormous tonnages of waste represent a significant potential for advanced recycling to recover fuels, chemicals and materials.
Waste materials are composed of complex chemical polymers, and the process of thermal degradation or pyrolysis of such materials, in the absence of oxygen, breaks up the long polymer chains to produce chains and molecules with lower molecular weights. These shorter molecules result in the formation of the oils and gases characteristic of pyrolysis of waste.
The production of oils from the pyrolysis of waste has been investigated with the aim of using the oils either directly in fuel applications, or with upgrading to produce refined fuels.

The pyrolysis oils derived from a variety of wastes are complex in composition and contain a wide variety of chemicals, which may be used as chemical feedstocks. The oil has a higher energy density, that is, a higher energy content per unit weight, than the raw waste. The solid char can be used as a solid fuel or as a char-oil, char-water slurry for fuel; alternatively, the char can be used as carbon black or upgraded to activated carbon. The gases generated have medium to high calorific values and may contain sufficient energy to supply the energy requirements of a pyrolysis plant.

Pyrolysis may be divided into three types according to the operating conditions: slow pyrolysis, conventional pyrolysis and flash pyrolysis. Slow pyrolysis is associated with the production of charcoal at low temperature with a long vapour residence time. Conventional pyrolysis involves moderate heating rates (20 °C/min) and pyrolysis temperatures typically between 400-600 °C. It produces a fairly even distribution of char, oil and gas, depending on the raw waste material. Fast pyrolysis involves high heating rates and short vapour residence time with rapid cooling of the pyrolysis gases, conditions which are optimum for the production of bio-oil.
Table 1 shows the fuel properties of oils derived from the pyrolysis of various wastes compared to gasoil. The plastics and tyre pyrolysis oils were produced by conventional pyrolysis and the bio-oil by fast pyrolysis. The oils produced from plastics and tyres have high calorific value, comparable to that of gas oil derived from petroleum. The bio-oil has a lower calorific value and contains oxygen at more than 40 wt%, because of the high oxygen content of the original cellulose, hemicelluloses and lignin of the feedstock biomass waste. The oxygen content is comprised of moisture, which can be more than 20 wt%, and also oxygenated compounds such as organic acids (5 to 10 wt%), aldehydes and hydroxyaldehydes (5 to 20 wt%), ketones and hydroxyketones (0- 10 wt%) and phenolic compounds (15 to 30 wt%). Because of the high oxygen and moisture content of bio-oil derived from biomass wastes, techniques for upgrading and refining pyrolysis bio-oils for liquid transport fuels or chemical feedstocks have been investigated. Upgrading methods for bio-oils mainly include catalytic cracking, catalytic esterification and catalytic hydroprocessing. Catalysts have also been used to upgrade the pyrolysis oils derived from waste. Zeolite catalysts have been used on tyre pyrolysis oils and plastics pyrolysis oils with a view to produce a highly aromatic oil, which can be used as a chemical feedstock. For example, use of a two-stage pyrolysis-zeolite catalysis reactor transforms the tyre pyrolysis oil to a highly aromatic oil containing ~50 wt% of benzene, xylene and toluene. 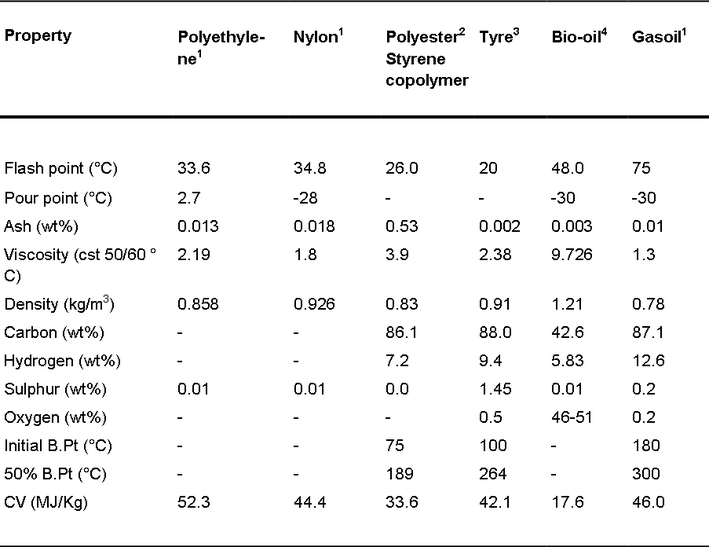 Table 1: Fuel properties of oils derived from the pyrolysis of various wastes
The recovery of high-value materials from wastes using pyrolysis technology has, for example, included the recovery of carbon fibres from plastic composites. Carbon fibres are highly valuable materials that are used extensively in the aerospace and automotive sectors. Pyrolysis thermally decomposes the composite plastic to oil and gas, leaving the residual carbon fibre and some char. The char is amorphous and easily separated from the carbon fibre by mild oxidation, producing a recovered carbon fibre with strength properties approaching 95% of the properties of the original material.

Other studies have used steam gasification to upgrade the char product from pyrolysis of a range of waste materials, resulting in the production of activated carbons. Such wastes as tyres, municipal solid waste, agricultural wastes including palm shell, coconut and textile waste have all been investigated and have produced activated carbons with similar surface areas and porosities to those of commercial-grade activated carbons.
Other commercial plants use fast pyrolysis of biomass wastes such as forestry or agricultural wastes to produce bio-oil. For example, Ensyn (Canada) have developed an entrained flow, rapid heating fast pyrolysis system to produce an oil product for use as a chemical feedstock and fuel oil. The biomass interacts with hot sand at ~500 °C and is very rapidly heated to produce fast pyrolysis primary products, which are then rapidly quenched to produce a liquid bio-oil product. Dynamotive (Canada) uses biomass wastes such as sawdust or bagasse (the fibrous matter that remains after sugarcane processing). These wastes are fed into a fluidised bed reactor, where fast pyrolysis at 500 °C occurs. Conversion of the biomass produces bio-oil (60 to 75 wt%), char (15 to 20 wt%) and non-condensable gases (10 to 20 wt%).

Gasification
Gasification converts hydrocarbon materials into a syngas at high temperature in the presence of oxygen in the form of air, steam, CO2 or pure oxygen. It has been extensively used for coal gasification, but has also been extended as an energy technology for processing biomass, sewage sludge, municipal solid waste etc.
Gasification in the presence of air reduces the calorific value of the produced gases. For example, air gasification of biomass normally produces a gas with a calorific value between 4 and 7 MJ/Nm3, whereas gasification with oxygen/steam generates gases with higher calorific values (10 to 18 MJ/Nm3). However, air gasification has the advantages of low energy input and low tar content in the gaseous stream. Oxygen gasification is not common due to the high cost of producing oxygen. Steam gasification is attracting increasing interest because it produces gases with a high H2 content.
The tar produced from gasification results in downstream problems, including tar blockages, plugging and corrosion in downstream fuel lines, filters, engine nozzles and turbines. Specifications of the tar content in the product syngas is normally less than 100 mg/Nm3 for internal combustion engines, and 5 mg/Nm3 for gas turbines, whereas the tar content in the product gas is generally 10 g/Nm3 for air-blown fluidised bed gasifiers and 0.5 to 100 g/Nm3 for the other types of gasifiers. Tar reduction methods include in-process catalytic cracking of the tar or downstream processes such as high temperature cracking of the tar to gas, hot gas filtration, or wet gas cleaning with equipment including spray towers, scrubbers etc.
A range of technologies have been developed to gasify wastes. The fixed bed reaction system is one of the most common processes used for gasification. Two basic types of traditional fixed-bed gasifiers are up-draft (counter-current) and down-draft gasifiers (co-current). Both these fixed-bed reactor types are based on natural slowly descending fuel flow caused by gravity. In an updraft gasifer, the feed is fed to the top of the gasifier and flows down slowly through drying, pyrolysis, reduction and oxidation zones. In a downdraft gasifier, the feed and the gasification agent (air) move in the same direction. The volatiles from pyrolysis pass through the oxidation zone, where the tar is partly cracked. The gas products leave at the bottom with a low tar content. Other types of reactor include entrained flow gasifiers and fluidised bed gasifiers.
Commercial waste gasification systems
Japan has many waste gasification companies. The Nippon Steel company operates 30 plants in Japan  for processing municipal solid waste. For example, the Nippon Steel plant in Ibraki, Japan uses a vertical fixed-bed, updraft gasifier to process 135,000 tonnes per annum of municipal solid waste. The product syngas is combusted directly for steam for power generation. The Ebara company operates 12 plants in Japan, 3 of which process mixed wastes and 9 of which process municipal solid waste; their capacities range from 19,000 to 165,000 tonnes per annum. For example, the Ebara TwinRec gasifier (Figure 3) in Kawaguchi, Japan processes 125,000 tonnes per annum of municipal solid waste and has been operational since 2002. The technology is based on a fluidised-bed gasifier, which produces a syngas that is combusted at high temperature (1350 to 1450 °C) in a cyclonic combustion chamber to raise steam for electricity production or district heating. 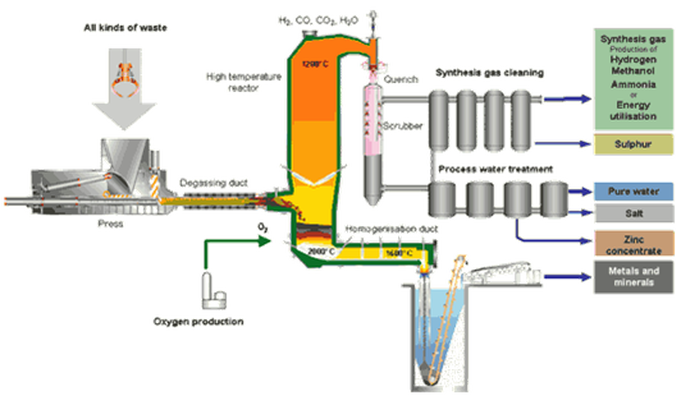 Figure 4: Schematic diagram of the Thermoselect pyrolysis-gasification system (Reproduced by permission of Thermoselect)
​Conclusion
There is increasing awareness that wastes is a valuable resource. The alternative thermal treatment technologies of pyrolysis and gasification offer process routes to recover a range of useful and, in some cases, high-value products from waste. The technology is proven and well established in Japan, with many reference plants that have operated over several years. The technology is not, as yet, established in the UK, but the advantages of a novel and alternative approach to wastes management through pyrolysis and gasification is stimulating growing interest and development of the technology.

This article is based on the ECG Distinguished Guest Lecture given by Professor Williams in the Chemistry Centre at Burlington House on Wednesday, March 14th 2012.