Smoke and mirrors are not the solution to global warming

Alan Robock
Rutgers University
robock@envsci.rutgers.edu
ECB Bulletin July 2016
Geoengineering is the “deliberate large-scale manipulation of the planetary environment to counteract anthropogenic climate change” (1). Proposed schemes include carbon dioxide reduction (CDR) and radiation management (RM). CDR technology exists but is very expensive, and no facilities exist for doing it on a large scale. It presents very different engineering, scientific, governance, and ethical issues than RM. Here I focus on the most studied proposed RM scheme, artificial creation of stratospheric aerosol clouds. I use the term “geoengineering” to refer to that scheme (2).

​Geoengineering is currently impossible. The technology does not exist, and there are serious questions as to whether it would be possible to create a cloud in the stratosphere that would have the desired effects. We can investigate the impacts of a geoengineering intervention by using analogues, in particular volcanic eruptions, to explore some of the resulting benefits and risks. We can also use climate models, that is, computer simulations that calculate the climate response to geoengineering scenarios. These are the same models that we use for weather forecasting and global warming climate simulations. They are validated with simulations of past climate, in particular the response to volcanic eruptions.
The audacious idea of controlling Earth’s climate brings up ethical and governance issues. The fundamental question is that of where to set the planet’s thermostat. Who would decide how to carry out geoengineering? What values would be used to decide? For whose benefit would this decision be made: for those controlling the geoengineering; for the entire planet, however defined; for the benefit of those most at risk; only for humans; or taking into account the rest of the natural biosphere? These decisions are in the realms of politics and power and are different from testable scientific hypotheses. But scientific evaluations of the benefits, risks, and uncertainties of various proposals should, in an ideal world, inform decisions about implementation of geoengineering. 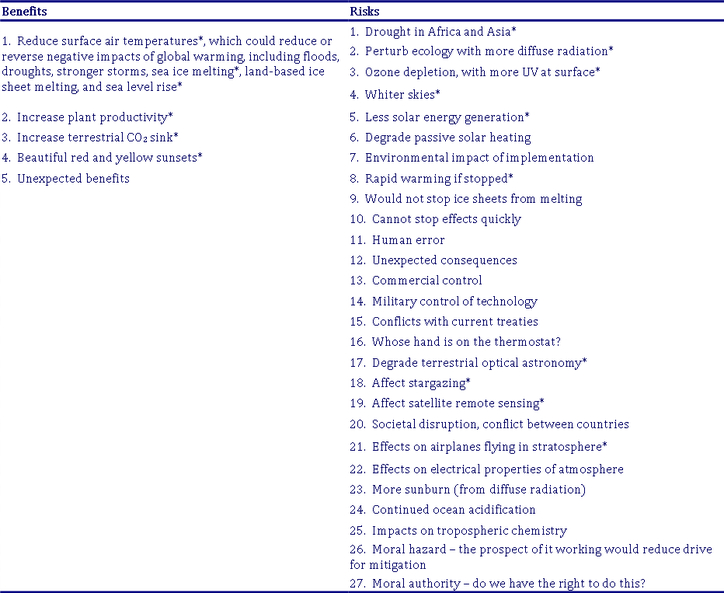 Table 1. Benefits and risks of stratospheric geoengineering. The effects that are observed after volcanic eruptions are indicated by an asterisk (*). Updated from (2).
​Ethical and governance decisions about geoengineering need to differentiate between research and deployment. As for geoengineering research, there have been many recent recommendations that it be enhanced, most recently from the U.S. National Academy of Sciences (3). But is such research ethical? Does it take resources away from other more useful pursuits? Is it yet another way for developed countries to continue to run the world to benefit themselves? Does the knowledge that this research is ongoing reduce whatever political drive there is toward mitigation because geoengineering will be seen as an easier solution to global warming? Does geoengineering research in a laboratory or a computer, with no emissions to the environment, have different ethical issues from outdoor research in which sulphur is emitted into the stratosphere? Would the existence of the technology enable hasty, politically-driven decisions to deploy? Is geoengineering research merely a smokescreen for weapons development? Or would it be unethical not to investigate a technology that may prevent widespread dangerous impacts of rising greenhouse gas concentrations? Would it be unethical not to provide policymakers with detailed information about the benefits and risks of various geoengineering proposals so that they can make informed decisions about implementation? Would it be unethical not to develop the technology to carry out geoengineering, both so that the costs and efficacy can be determined (maybe it will prove impossible or much too expensive or dangerous), and to have the designs available so that it could be rapidly implemented if needed?
Certainly if the research itself were dangerous, directly harming the environment, this would bring up ethical concerns. To test whether there were a climate response or whether existing sulphuric acid cloud droplets would grow in response to additional emissions would require very large emissions, essentially amounting to implementation of geoengineering, and would therefore be unethical. But what about flights to spray a little SO2 or other sulphur species and then observe how particles would grow or the response of ozone? Although no such governance now exists, any such outdoor experiments need to be evaluated by an organisation, like a United Nations commission, independent from the researchers, that evaluates an environmental impact statement from the researchers and determines that the environmental impact would be negligible, as is done now for emissions from the surface. Additional monitoring capabilities would be needed. There would also need to be enforcement of the limits of the original experiment, so that it would not be possible to expand the experiment in light of inconclusive results.
To make decisions about ethics requires a declaration of values, unlike in the physical sciences, where nature follows accepted laws such as conservation of energy. The above conclusions are based on the following principles: curiosity-driven indoor research cannot and should not be regulated, if it is not dangerous; emissions to the atmosphere, even for scientific purposes, should be prohibited if they are dangerous; and any results from geoengineering research need to be governed in the same way as all other dangerous human inventions, such as ozone depleting substances and nuclear weapons.

I have previously concluded that “in light of continuing global warming and dangerous impacts on humanity, indoor geoengineering research is ethical and is needed to provide information to policymakers and society so that we can make informed decisions in the future to deal with climate change... Outdoor geoengineering research, however, is not ethical unless subject to governance that protects society from potential environmental dangers” (4). Eventual decisions about deployment will need to consider the relative benefits and risks, which will be determined by research. All these potential benefits and risks (Table 1) will need to be quantified. Because some can never be quantified, I am sceptical that geoengineering will ever be deployed. Of course, real-world decisions are made without full knowledge and sometimes under pressure from extraordinary events. Much more research in stratospheric geoengineering, conducted transparently and published openly, is needed for future policy decisions to be as informed as possible.
Even at this late date, a global push to rapid decarbonisation by imposing a carbon tax will stimulate renewable energy and allow solar, wind, and newly developed energy sources to allow civilisation to prosper without using the atmosphere as a sewer for CO2. Adaptation will reduce some negative impacts of global warming. Geoengineering does not appear to be a panacea; geoengineering research should be in addition to strong efforts toward mitigation, and should not be a substitute. In fact, geoengineering may soon prove to be so unattractive that research results will strengthen the push toward mitigation.
Acknowledgments
I thank Brian West for drawing Figure 1. Supported by U.S. National Science Foundation grants AGS-1157525 and GEO-1240507.