Efficacy of treatments for Varroa infestation, and their side effects on honeybees

Robin McArthur
Reading University
robinmcarthur1@gmail.com
ECG Bulletin July 2020
Honeybees (the Apis genus) are insects known principally for producing honey and for their valuable service as pollinators (1). Pollination of agricultural crops (much of which is provided by honeybees) has been valued at $215 billion per year to the global economy (2). Honeybees are also a key part of many ecosystems around the world, especially in the regions where they are native (3). Despite their undeniable importance, honeybees face grave threats in the forms of pesticides  (particularly neonicotinoids: see ECG Bulletins July 2015, February 2017, January 2019), habitat loss (due to the mechanisation of farming and the loss of many field-bordering hedgerows and natural spaces) and the global spread of various pests and parasites (4).
Mites have different lifestyles and effects on the honeybee colony: some are detrivores or fungivores, e.g. Tyrophagus putrescentiae (7), some are kleptoparasites (wax/pollen/honey thieves), e.g. Melittiphis alvearius (8), some are predators, e.g. Parasitellus fucorum (7), and some are direct parasites of honeybees, such as the internally parasitic tracheal mite Acarapis woodi (6).

The most infamous pest of European honeybees (Apis mellifera) is Varroa destructor, an external parasitic mite which feeds on honeybee brood and adults (9, 10). Somewhere in Japan or Korea around the mid-1900s, V. destructor spread from Asiatic honeybees (A. cerana), which can naturally resist and tolerate this mite species, to European honeybees, which cannot (11). This devastating parasite enters the colony through phoresy, i.e. the use of one organism by another for transportation (12). Once an unfortunate worker bee is boarded (typically during a foraging trip or while robbing from an infested colony) by an adult female Varroa mite and brings it within the colony, the mite detaches and enters an uncapped brood cell containing a developing honeybee larva (10). Once the cell has been capped, the mite lays several eggs, and the resulting offspring develop in roughly the same time it takes for the nearby larvae to reach the adult stage of development. Haploid male Varroa mate with their diploid sisters within the brood cell after both have matured, and shortly afterwards the males die. During this time the Varroa mother and her mobile offspring feed freely on the bee larva, and after the developed honeybee emerges the now mature and mated female Varroa mites will spread throughout the colony, parasitising other honeybees and their brood. Varroa mites prefer to invade drone (male) brood cells as the longer development time of drones allows for roughly twice as many Varroa offspring to develop compared to worker (female) cells. Drones also contain more fatty esters than workers, which makes them more attractive to the Varroa mites (6, 9). Varroa populations within honeybee colonies will grow exponentially as long as there are brood cells available to exploit (6). The typical feeding activity of V. destructor involves squeezing beneath a honeybee’s abdominal sclerites (where the mite is relatively safe from being dislodged by grooming behaviour) or attaching to the back of the bee’s head before piercing the soft intersegmental tissues to feed on the haemolymph and fat body within (9).
The spread and proliferation of V. destructor results in deformed and weakened workers and drones, encourages the spread of diseases, and can lead to the rapid decline and death of the colony as a whole in under a year if untreated (15, 16). This pathway of deterioration and disease in colonies infested by Varroa mites is called varroosis (17).

Common acaricides and their side effects
To combat the effects of Varroa destructor infestations on honeybee colonies, a range of treatments (called acaricides) have been developed to kill Varroa and other invasive mites. The most commonly used synthetic acaricides (and the products that contain them) are amitraz (Apivar and Varidol), coumaphos (Checkmite), flumethrin (Bayvarol) and fluvalinate (Apistan). These are often called the ‘hard’ acaricides, and are typically applied to colonies using specially treated strips of paper or card placed between combs. Various organic compounds are also used for this purpose such as formic acid (Apivarol and Miteaway), oxalic acid (Api-Bioxal), hops beta acid (Hopguard) and thymol (Apilife and Apiguard), an aromatic extracted from thyme oil. These organics are commonly called ‘soft’ acaricides, and have a wider range of application methods. A comparison of available acaricides is provided in Table 1. 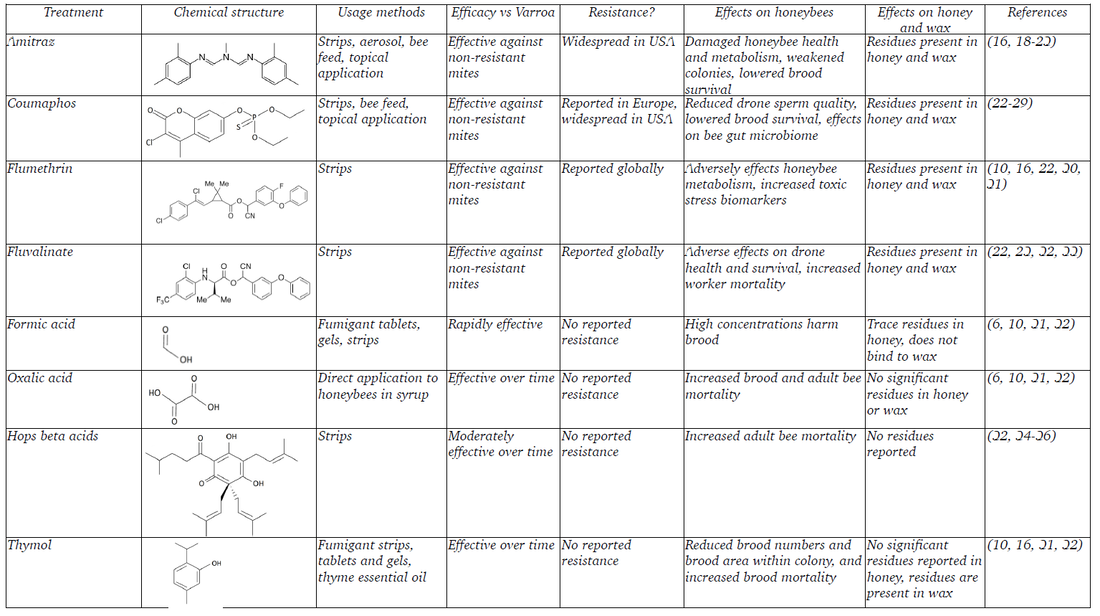 Table 1: A comparison of eight acaricide treatments used to reduce or eliminate Varroa destructor infestations within honeybee colonies. Due to the staggering numbers of studies conducted under an incredibly broad range of environmental and contextual conditions, the “Efficacy vs Varroa”, “Effects on honeybees” and “Effects on honey and wax” categories are generalised and no specific figures are given.
Alternative treatments and best practice
Non-chemical methods have been trialled to reduce Varroa infestations. These range from sticky boards placed beneath a mesh screen colony base, which capture and kill any Varroa mites which fall through the mesh, to tobacco smoke fumigation through the colony, and even the use of entomopathogenic fungi as a form of biological control (10, 37). The use of entomopathogenic fungi such as Beauveria bassiana appears to be the most promising of these methods, with great successes in laboratory experiments and limited success in field trials, though it seems that the conditions within honeybee colonies may inhibit the reproduction and spread of this fungus between V. destructor mites (10, 37, 38). None of these methods are thought to have significant impacts upon honeybee health, however, on their own they are far less effective in treating Varroa infestations than the chemical treatment options (10, 38).
Ideally, beekeepers should focus on using the ‘soft’ acaricides and alternatives such as biological control wherever possible. However, lower costs and ubiquity of the ‘hard’ acaricides combined with a lack of public knowledge relating to IPM and best practice for combatting varroosis make this an unlikely prospect for the time being (10, 17, 37, 38)