The measurement of atmospheric carbon dioxide​

Paul Monks
University of Leicester
p.s.monks@le.ac.uk
ECG Bulletin January 2007
There is a strong case for arguing that the accurate measurement of carbon dioxide in the atmosphere is the most important analytical challenge presented to contemporary chemistry. The initial uncertainties linking increased carbon dioxide levels to climate change voiced at the beginning of this century have been replaced by the economic and political realities of restricting our dependence on the combustion of fossil fuels, if we wish to avoid serious changes to the climate and to the environment. Key to the decisions that lie ahead in the next decade are the data on atmospheric carbon dioxide levels. Paul Monks from the University of Leicester, and an ECG committee member, describes his research group’s collaboration in the measurement of atmospheric carbon dioxide using satellite-based analytical techniques.
ENVISAT
Retrieval of total columns of greenhouse gases with suitable accuracy and precision from space is a relatively new and challenging task. With the recent launch of the SCIAMACHY instrument on board the satellite ENVISAT (Figure 1), there is now an ability to measure the global total column amounts of a range of greenhouse gases (CO2, CH4 and N2O) [Buchwitz et al., 2000; Buchwitz et al., 2004]. 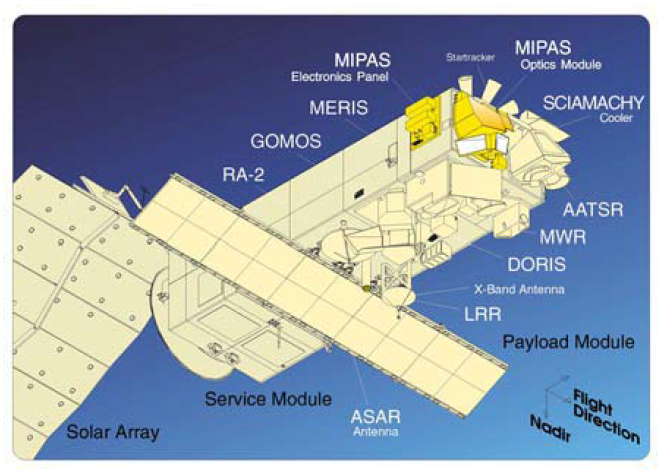 Figure 1: ENVISAT is an advanced Earth observation satellite with a unique combination of sensors to vastly improve the range and accuracy of scientific measurements of the atmosphere, oceans, land surface and ice. Its total range of capabilities far exceeds those of any previous Earth observation satellite. It was launched in Spring 2002 by an Ariane-5 launcher.
Atmospheric carbon dioxide
Since the industrial era the atmospheric concentration of CO2 has risen by ~ 30% from 280 (±10 ppmv) to 367 ppmv in 2000 [IPCC, 2001] with growth rates varying between 0.9 ppmv/yr and 2.8 ppmv/yr.

The increase of CO2 in the atmosphere is caused by increased CO2 emissions primarily due to fossil fuel burning (~ 75%) and changes in land use (~ 25%). Only about half of the emitted CO2 remains in the atmosphere, where it affects the Earth’s radiation balance. The rest is partly dissolved in the oceans and partly taken up by the biosphere over land.

Measuring atmospheric carbon dioxide
Atmospheric measurements from the CO2 surface network, consisting of about 100 stations, have been used to infer partitioning of CO2 sources and sinks amongst oceans and land [e.g. Bousquet et al., 2000; Gurney et al., 2002]. These studies showed that the land uptake of CO2, and ocean uptake to lesser extent, varies considerably in time and space. In the 1980s the land-atmosphere net flux was close to zero, mainly as a result of changes in land use (deforestation in the tropics), while during the 1990s the terrestrial ecosystem represented a strong sink comparable to the oceans [IPCCC, 2001].

More recent studies suggest that the oceans may have played a much larger role in the absorption of CO2 [Sabine et al, 2004]. The accuracy of these findings is, however, limited due to the low number of atmospheric and oceanic CO2 measurement sites and the rather sparse distribution of them around the globe. In particular, the global networks lack continental stations that are representative of sources and sinks over vegetated areas. In addition, the temporal sampling of ground-based networks is too low. To predict future atmospheric CO2 levels, more accurate quantification and understanding of the carbon sources and sinks is needed. In addition, verification of the Kyoto protocol, which aims at reducing anthropogenic emission of greenhouse gases, requires an accurate quantification and monitoring of CO2 sources and sinks.

Satellite measurements offer by their inherent spatial and temporal sampling have the potential, if they can measure with suitable accuracy, to improve the greenhouse gas flux estimates derived from theoretical modelling, surface and airborne measurements. Combination with models through data assimilation and inverse modelling would be a particularly powerful method with which to take advantage of the new CO2 data sets. In a supplementary article, which is available on the ECG page of the RSC’s web site, I describe in more detail the methodology for satellite-based measurements of atmospheric carbon dioxide concentrations.

BIOGRAPHICAL NOTE: Paul Monks’ primary research interests are the scientific questions underlying: the role of photochemistry in the control of atmospheric composition; chemistry and transport, particularly the impact of long-range transport on chemical composition; the feedbacks between climate and atmospheric chemistry; organic complexity and the control of regional pollution and the measurement of the troposphere from space.

An extended version of this article, Measuring atmospheric CO2 from space, is available on the ECG page of the RSC’s web site at http://www.rsc.org/Membership/Networking/InterestGroups/Environmental/bulletin.asp