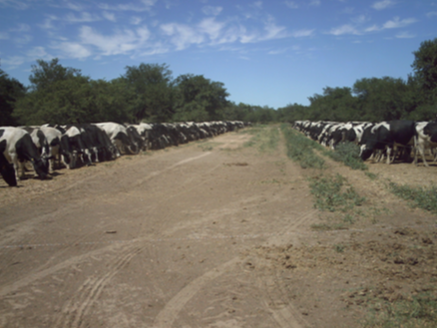 This two-year project has been an international partnership investigating the sustainable management of arsenic contaminated water and soil in rural areas of Latin America. The target zones are near Calama in the Antofagasta region of northern Chile and the province of south-east Cordoba in the Chaco-Pampean plains of Argentina. In both areas high levels of volcanic arsenic are affecting rural water supplies and agriculture through contaminated soils and irrigation water. In Antofagasta, Chile, copper mining is an additional source of arsenic contamination.

A previous account of this EU-funded project appeared in the ECG Bulletin July 2007. The final meeting for the project was held early in December 2007 in Bell Ville, Argentina, one of the sites of the Argentinean field trials. The meeting was divided into an update and briefing session for the partners, and included a field visit to a local dairy farm, which had participated in trials measuring arsenic concentrations in milk, as well as a two-day workshop.

During the first day, the project participants from each of the target zones presented information about the health and socio-economic effects of the high levels of soil and arsenic water in the target zones and similarities with other arsenic-contaminated regions around the world.  The second day focused on monitoring and remediation methods, including soil washing, phytoremediation and water treatment technologies.  It was vital to inform stakeholders without causing alarm, and to offer simple and affordable solutions which may be implemented at the community level.

Continuation of this project is unlikely in the immediate future due to the lack of availability of EU funding for arsenic contamination research.  However, it is hoped that the valuable partnerships forged during this project may be maintained and further investigations into field trial remediation in the target zones resumed when funding does become available.