Robert Angus Smith and the pressure for wider and tighter pollution regulation, 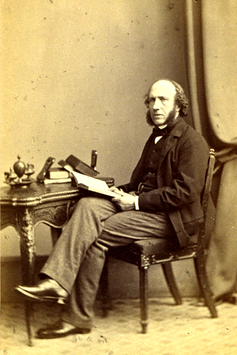 Born into an intensely religious family in Pollokshaws, near Glasgow, in 1817, Robert Angus Smith became interested in chemistry through attending lectures in the late-1820s given by Thomas Graham (one of the founders of the Chemical Society of London). Smith completed his chemical education by obtaining a PhD under the tutelage of Justus von Liebig at the University of Giessen in 1841. A fellow student at Giessen, Lyon Playfair, invited Smith to become his assistant at the Royal Manchester Institution in 1843, and the two men collaborated on a report on sanitary conditions in industrial Lancashire, and in particular on the role of decomposing matter in disease (which was also one of Liebig’s interests). Playfair left Manchester in 1845, but Smith remained and became a successful consulting analytical chemist with many friends and colleagues in the heavy chemicals industry of northern England. Through these friendships, Smith became aware of the distortion of evidence in several cases where chemists had been summoned as expert witnesses in legal actions brought against chemical companies accused of pollution offences. Smith began a campaign for the reform of scientific testimony in courts of law and later was joined by William Crookes and Chemical News, The Times, Nature and the British Association for the Advancement of Science. While in Manchester Smith had begun to study air quality, reporting to a number of Parliamentary enquiries. When the Alkali Works Act of 1863 was passed, Robert Angus Smith was an obvious candidate for the post of Inspector.

Parliament approved the Alkali Works Act for an initial 5-year period to regulate the release of hydrogen chloride gas (or muriatic acid gas, as it was called in the alkali trade) by alkali works operating the Leblanc process. Under the Act the Alkali Inspectorate was established and a team of four sub-inspectors under Smith as Inspector ensured at least 95% of the corrosive gas was condensed and not released from tall chimneys. Many promoted this noxious vapour for its prophylactic benefits. The Act was extended indefinitely in 1868 and then revised in 1874 with a volumetric measure for measuring gas escapes; sulfur dioxide and nitrogen dioxide emissions were also regulated.

The remainder of the 19th-century brought dramatic increases in both the tonnages of chemicals produced and the range of nuisances from chemical processes. Robert Angus Smith (supported by his inspectors) used every opportunity to draw attention to these unregulated nuisances whether in his Annual Reports to Parliament, through discussion within the Local Government Board or during Parliamentary enquiries such as the 1876 Royal Commission on Noxious Vapours.

These unregulated nuisances included sulfur waste, copper works (in the main Swansea and St Helens), cement works, potteries (particularly salt-glaze) and ammonia. Sulfur waste was produced during the third stage of the Leblanc process and by the 1870s some 500,000 tons of waste were produced annually in Britain since between 1.5 and 2 tons of waste resulted from every ton of soda produced. This waste contained almost all the sulfur originating from the sulfuric acid in the first stage. Given that sulfur was expensive and regular supplies (initially from Sicily) were difficult to secure, some attempts were made to recycle the sulfur (Gossage in 1837; Mond in 1861; McTear in 1871) but these proved unsuccessful on the large-scale (until the Claus-Chance process in 1881) and most waste was dumped on waste ground surrounding the alkali works. The waste proved to be a constant source of sulfur dioxide and hydrogen sulfide pollution.

Copper works in Swansea and St Helens were regular polluters. The smoke comprised a concentrated mix of the gases sulfur dioxide and hydrogen fluoride with particles of copper, sulfur, arsenic, lead, antimony and silver. Estimates in the 1840s indicate the Swansea smelters released about 92,000 tons of sulphurous acid. Ammonia was an infrequent polluter but any release caused a major hazard. Most ammonia came from gas works and it was generally during transportation of the ammonia liquor to fertilizer works for conversion into ammonium sulfate that dangerous incidents (sometimes resulting in death) were reported.

Portland cement works were regularly reported to the Inspectorate and offending nuisances included dust, volatile salts of potassium chloride, sodium sulfate and potassium sulfate and a smell originating from the organic matter in the clay.  Although furnaces were redesigned regularly the dust remained a problem well into the 20th-century. Potteries were also brought to the attention of the Inspectorate, largely because of black smoke from burning coal for heating the kilns; on many occasions the atmosphere of Longton was likened to that of Widnes.   However, salt-glaze potteries were singled out for particular attention because during the final twenty-minutes of firing common salt was thrown over the red-hot pottery with the release of hydrogen chloride gas.

Changes to the regulatory framework were adopted from the 1870s to strengthen the powers of an Alkali Inspectorate facing an ever-increasing list of nuisances. These included “best practicable means”, continuation of central regulation, enforcement by legal prosecution and swifter regulation of nuisances. Smith and his inspectors had developed a stance on manufacturers adopting the “best practicable means” for preventing the discharge of pollutants into the atmosphere. In many cases the technical means for remaining within desirable limits were not available and yet by adopting the “best practicable means” and working closely with the inspectors manufacturers were more likely to develop the technical solution.  This approach was also supported by manufacturers.

The benefit of central regulation rather than delegation to local authorities was a constant point of debate following the transfer of the Alkali Inspectorate to the Local Government Board in1872 as part of the Public Health Act. The Board was adamant the Inspectorate should be devolved but Smith fought hard for central regulation – consistency of regulation, well-qualified and experienced staff, cost-effective administration and independence from local vested interests. The debate came to a head during the Royal Commission on Noxious Vapours (1876) and its Report in 1878 supported Smith’s position.

However, Smith had to bow to pressure from the Board over enforcement by legal prosecution. Following his traumatic experience as a defence witness in the Peter Spence court case in 1857, Smith had fought long and hard to adopt a co-operative approach with manufacturers whereby inspectors acted as peripatetic consultants and avoided using the courts. In the lead up to the 1876 Royal Commission Smith was asked how many prosecutions had been taken out; his reply was four. This appalled his civil service colleagues given the extensive damage cited when legislation was being drawn up in 1863. After 1878 Smith was instructed to use the courts for enforcement but remaining reluctant he always made sure the final decision was taken in consultation with the Local Government Board so as not to undermine his relationship with manufacturers.

With the increasing notification of nuisances it became important to have a mechanism whereby nuisances could be added to the “regulated list” quite quickly and not have to wait until a Parliamentary enquiry produced a report.  Following from the recommendations of the 1876 Royal Commission on Noxious Vapours, revised legislation in 1881 gave powers to the appropriate minister to make Orders extending the list of scheduled processes and noxious and offending gases.

The impact of these nuisances on public health and occupational health began to be studied seriously from the 1870s. Before this the prophylactic benefits of the nuisance vapours were often promoted; Henry Hussey Vivian was so convinced of the benefits of sulphurous copper smoke from his smelters that he gave his workers dilute sulfuric acid to drink during a cholera outbreak! Even Medical Officers of Health (appointed from 1848) found difficulty apportioning responsibility to nuisance vapours for illness and death. John Simon, Medical Officer to the Local Government Board, was however adamant about the blight caused to people’s lives by these toxic vapours.

The public and manufacturers were often ignorant of the long-term effects of industrial work on health. The 1895 Factory and Workshop Act required the notification of industrial diseases for the first time, including lead, arsenic and phosphorus, but it was only with the appointment of Dr Arthur Whitelegge as Chief Inspector of Factories in 1896 and Thomas Legge as the first Medical Inspector of Factories in 1898 that a concerted effort began against industrial disease.

[An article covering the main topics in this talk will be published in the July 2012 edition of Ambix in a special volume commemorating the publication of Rachel Carson’s Silent Spring in 1962].

This article is based on a presentation by Peter Reed at the joint ECG/Historical Group Symposium ‘Environmental Chemistry: A Historical Perspective’ held at Burlington House on 26th October 2011.