Recent advances in the analysis of complex environmental matrices (2013)

About 70 delegates and speakers attended this one-day meeting, which was a joint venture of the Environmental Chemistry Group and the Separation Science Group of the Royal Society of Chemistry and was organised by Dr Roger Reeve from the Environmental Chemistry Group and Professor Graham Mills from the Separation Science Group. The meeting covered analysis of solid, liquid and atmospheric samples, with the common theme of liquid or gas chromatographic separation (LC or GC) with mass spectrometric (MS) detection. The needs of sensitivity and analyte identification in complex matrices were highlighted throughout. Laboratory and field analytical techniques were covered in the presentations.

Graham Mills (University of Portsmouth, Portsmouth, UK) opened the meeting and chaired the first session (Talks 1 and 2). Session Two was chaired by Roger Reeve (University of Sunderland, Sunderland, UK) and comprised of three presentations (Talks 3 to 5). The lunch break gave an opportunity for delegates to network, view the literature, and discuss the products on display from the meeting sponsor Agilent Technologies. The four talks in the afternoon session (Talks 6 to 9) were chaired by Dr Alan Handley (Head of the Pharmaceutical Sciences Group at LGC and President of Royal Society of Chemistry, Analytical Division).
The methodology was as follows: Daphnia magna exposure to ZnO nanoparticles alongside suitable control samples; extraction of the metabolites; analysis by direct infusion Fourier Transform Ion Cyclotron Resonance (FT-ICR) mass spectrometry; followed by signal processing, statistical analysis and metabolite identification with accurate two-dimensional mass spectrometry (MS/MS). More than 4,000 signals were produced from each of 80 spectra to be data-mined. Detailed results of the investigation are to be published later, but the approach is proving to give new biochemical information on the effects of nanoparticles and this could be used inform future studies using more complex test organisms.

Using comprehensive GC (GCxGC) in field devices for atmospheric chemistry. Professor Alastair Lewis (University of York, UK)
The speaker described the development of miniaturised two-dimensional gas chromatography (GCxGC) devices for use in atmospheric chemistry. There is a need for portable systems that can easily be used in different field environments. The development of such systems is not a simple task in view of the complexity of the instrument and the need to accurately control flow and temperature. Recent work has involved the use of microfabrication methods borrowed from the electronics industry. The aim is to incorporate all sub-systems in a single module: a lab-on-a-chip.  Sophisticated methods are used to etch the silicon wafer to make the capillary GC columns and to either pack or coat the narrow (250 µm) channels with a stationary phase. These chromatographs have for example been used to separate volatile hydrocarbons such as benzene, toluene, and xylenes; however, much more work is needed before these systems can be used routinely in the field.
​Analysis of VOCs in complex samples using thermal desorption-GC-MS/olfactory and GC-IMS. Professor John Dean (Northumbria University, Newcastle, UK)
Moving on to studies relating to indoor environments, the speaker discussed issues concerning malodours from washing machines. Are the malodours from the machine or from the laundry itself? If they are from the washing machine, what part is responsible? A number of washing machines were investigated, taking swabs from surfaces and comparing with samples from the fabrics. The volatile organic compounds (VOCs) were analysed by headspace-solid phase micro-extraction (HS-SPME) olfactory GC-MS. Olfactory detection was used to match the chromatographic peak with a particular odour. The most common sources of odours from washing machines were found to be the rubber seal and the sump. Microbial identification from washing machines and laundry gave evidence of contamination of fabrics from the washing machines. Analytical profile index strips and matrix-assisted laser desorption/ionisation-time of flight mass spectrometry (MALDI-TOF-MS) were used in these investigations (Figure 2). Most microbes were from environmental sources (i.e. not pathogenic). HS-SPME-GC/MS was used to identify VOCs from bacteria found in the washing machines and fabrics. Ion mobility spectrometry (IMS) may be a possible method for screening VOCs in samples. There is the potential to detect small sulphur- and nitrogen-containing VOCs, but further work is required on authentic samples.

Figure 2: Identification of bacteria using matrix assisted laser desorption-ionisation time of flight mass spectrometry (MALDI-TOF-MS) and Analytical Profile Index strips.
GC-ICP-MS reference methodology to quantify polybrominated flame retardants in environmental waters relevant to the European Water Frame Directive. Dr Panayot Petrov (LGC Limited, Teddington, UK)
The aim was to develop (1) a validated measurement procedure for polybrominated diphenyl ethers (PBDEs) at concentrations specified in the EU Water Framework Directive and (2) advanced analytical methodologies for monitoring pollutant interactions and partitioning between different environmental aquatic compartments. For the first objective, the metrological aim was to quantify six specific PBDEs with a limit of quantification as total concentration below 0.15 ng/L in whole (non-filtered) water. Two separation schemes were devised. The short method (four samples per hour with baseline separation of the target congeners) was suitable for pre-screening. The long method (0.5 samples per hour) showed separation of all 180 congeners. Current instrument detection limits with external calibration are below 1 ng/mL Br and are similar for 79Br and 81Br detection and for quadrupole and sector field instruments. This corresponds to 25 fg/mL Br with a 40,000x preconcentration stage.

Analysis of non-polar organic compounds in water by GC-MS/MS. Dr John Quick (Severn Trent Services, Coventry, UK)
The presentation described recent work to transfer methods for mainly non-polar compounds from GC-MS and GC-electron capture detection to GC-MS/MS. The aims were to give shorter analytical run times, simplify preparation procedures, achieve specified limits of detection with difficult matrices, and give unambiguous identification of target analytes. Detection in the ng/L range was shown for typical contaminants DDT, HCH and Captam using triple quadrupole MS and was validated on a range of samples (soft/medium and hard potable, borehole and surface waters). Samples were prepared by extraction into n-hexane/ethyl acetate and direct injection into the GC-MS/MS. Two MS transitions were monitored, giving most limits of detection < 2 ng/L. For waste water analysis (typically for polyaromatic hydrocarbons and PBDEs), sensitivity and selectivity become particularly important, as concentrations can be < 0.2 ng/L. Pre-treatment with liquid-liquid extraction was followed by clean-up using an NH2 solid-phase extraction cartridge, followed by solvent evaporation. Equivalent sensitivity (0.1ng/L) was demonstrated for standards and 0.7 to 2.0 ng/L for real samples.

Enantioselective analysis of chiral pharmacologically active compounds in urban water. Dr Barbara Kasprzyk-Hordern (University of Bath, Bath, UK)
Not only can drugs be chiral, but their physiological effect depends on the enantiomer present. A major route for entry of drugs into the environment is through excretion of the drug and its metabolites.

Monitoring of cyclic volatile methylsiloxanes in the environment − an analytical challenge. Dr Chris Sparham (Unilever, Sharnbrook, Bedford, UK)
Cyclic methylsiloxanes (octamethylcyclotetrasiloxane, D4, and decamethylcyclopentasiloxane, D5) are used in the manufacture of large siloxane polymers and as a base fluid or ‘fragrance carrier’ for a range of consumer applications. D4 is no longer used in personal care products but is seen as highly problematic in the environment. Analysis of surface water samples was by  headspace-GC/MS, with internal standards being added in the field (Figure 6). There were major problems in producing clean blanks. Siloxanes are ubiquitous in analytical laboratories, because septa, columns, vial caps and personal care products from laboratory workers may all contain siloxanes, and analytical operations had to be performed in clean air cabinets. Sediment samples were analysed by large volume solvent injection GC/MS after accelerated solvent or liquid/solid extraction. Biota samples were analysed by purge and trap methods after exhaustive (20 to 24 hour) extraction and introduced into the GC by concurrent solvent recondensation. These analytical methods were sufficiently sensitive for wastewater, sediments and biota, but concentrations in environmental waters were near or below the limit of detection. Passive sampling was investigated to increase the limit of detection, with the specific method chosen to accomodate the high partition coefficents and volatilities of the compounds and to not be a source of D4 and D5 contamination. Low-density polyethylene was chosen as the receiving phase. Performance reference compounds were preloaded onto the samplers to provide in situ calibration data. The estimated limit of detection for D4 was approximately 0.1 ng/L in river water. 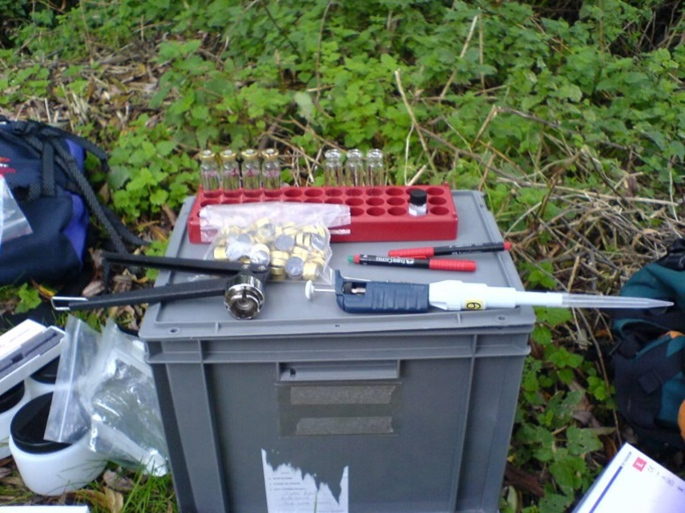 Figure 6: Headspace sampling in the field used for measuring volatile siloxanes.
Characterisation of diesel exhaust particulates by high definition GCxGC-TOF-MS – classification and component speciation for toxicity assessment in humans. Nick Bukowski (ALMSCO International, Llantrisant, Wales)
There is growing evidence that combustion-derived nanoparticles from diesel emissions and diesel exhaust particles cause oxidative stress and inflammation leading ultimately to cell death. No two diesel exhaust particle samples are alike, as shown even by simple fractionation and precipitation. Thermal desorption GC-MS shows the complexity of the samples and need for further separation. Thermal desorption GCxGC-TOF-MS was used in these investigations. Automation of the thermal desorption analysis removed sample preparation and enabled good quality control. The thermal desorption apparatus included sample recollection of the split flow, which allowed repeat analyses to validate analyte recovery and gave an indication of any bias. Cryo-modulation was used between the GC columns but, as running and capital costs are high, preliminary comparisons were later made with flow-modulation. Future work is to translate the cryogenic modulation methods to flow modulation.
Screening for pharmaceuticals and personal care products in effluents and surface water using LC-Q-TOF. Anthony Gravell (Environment Agency for England and Wales, Llanelli, Wales)
Pharmaceuticals in environmental waters include hormones with significant endocrine disrupting effects and antibiotics that could contribute to the build-up of world-wide antibiotic resistance, because many pharmaceuticals are ‘pseudo-persistent’. There is a proposal to add some high-use pharmaceuticals to the EU Water Framework Directive Annex X. In order to detect the low concentrations found in effluents and surface waters, a passive sampling technique was used with a polar organic chemical integrative sampler. After extraction, the chromatographic analysis was by liquid chromatography with TOF-MS detection. This instrument was used because it has lower mass uncertainty than quadrupole mass spectrometers. Identification was by scoring bases on accurate mass matching of an isotope (mass match), isotope distribution (abundance match) and isotopic spacing (spacing match).
The above abstracts were prepared by Roger Reeve and Graham Mills based on presentation slides supplied by the speakers. The complete slides are available on:
http://www.rsc.org/Membership/Networking/InterestGroups/Environmental/PastEvents.asp​​