Raising air quality awareness among school children and the public

Zoë Fleming
National Centre for Atmospheric Science
University of Leicester
ECG Bulletin July 2014
​A new initiative to set up mobile atmospheric chemistry instruments in schools has been funded by the RSC. Using low-cost sensors that can measure nitrogen oxides, ozone, and total organics, the initiative allows school children to become involved in the monitoring of pollution in the air around them.

​A new type of air quality monitoring instrumentation is emerging on the market, allowing small mobile sensors to track air pollution in any location. The Environmental Chemistry group of the RSC received funding to start up an Atmospheric Chemistry educational toolkit for use in schools across the country. We set up at Bushloe High school in Wigston, Leicester, for a few weeks in October 2013 and also demonstrated to school children in Leicester at the Abbey Road Pumping Station Museum.

Since then, the instruments have been measuring at a busy traffic junction, in a concerned Leicester resident's garden, and at the city council air quality monitoring station run by Leicester University. The instruments have been characterised and calibrated, and have proved to be consistent, allowing the data to be used for both real-time atmospheric chemistry research and for public and school outreach projects. We teamed up with Leicester city council and the JOAQUIN European air quality project in April to run a big outreach event in Leicester city centre to educate the public about air quality. By coincidence, the event was held during the week when Saharan dust and high air pollution were all over the news, and many concerned members of the public approached us to find out more.
We have created posters and activities about atmospheric chemistry and air pollution for children of all ages to learn from, including a data analysis tutorial for children from about 10 years old to A-levels. Science classes at schools where the instruments are temporarily based can go through an analysis and interpretation of the air pollution at their school. Thanks to more RSC funding, we are due to extend the project to more local schools in autumn 2014 and make it a regular activity moving the instruments from school to school every few weeks so that they can compare their data with other local schools. For schools awaiting the instruments or any other interested school, we have produced a tutorial to interpret air pollution in their local area using public data from the DEFRA air quality web pages through the AURN (Automatic Urban and Rural Network). The schools access the nearest air quality station and extract data from the last week's time series plot, pulling out minimums and maximums for weekdays and weekends, at midday and at the morning rush hour. These values are tabulated into spreadsheets that we and the school children collate to create a local picture of pollution. Our ambition is to create a web site that enables schools around the country to add their spreadsheet online to create a map of pollution levels across the country. 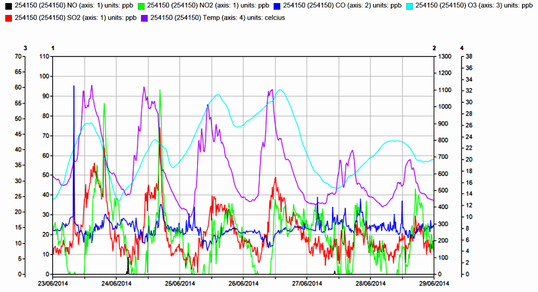 Live data from the AQMesh web site, used to input the school's pollution data into a case.