ECG Bulletin January 2014
This article provides an overview of the current state of PCB analysis, risk assessment and forensic techniques in contaminated land assessments undertaken in the UK today. It provides a discussion on the merits and drawbacks of the current situation and provides advice on how improvements can be achieved.
Monsanto produced nine main Aroclors that accounted for 99.97% of production (8); each was identified with a four digit code. For example, Aroclor 1260 contained an end product with 60% chlorine by weight. Similar naming systems and production methods were used by other manufacturers; the proportions of congeners in Aroclor 1260, Clophen A60 and Kanechlor 600 are almost identical (2).

Some of the most comprehensive information on PCB use comes from the United States, where most PCBs were produced for capacitors (~45% of sales) and transformers (~25% of sales), with ~20% of sales attributed to plastics and hydraulic lubricants, and minor uses; the remaining ~10% were exported (8). Limited data are available for PCB use in the UK. The UK Soil and Herbage Survey (6) identified that approximately 66,500 tonnes of PCBs were manufactured between 1954 and 1977, of which around 27,000 tonnes were exported to other countries. However, there were no figures for quantities imported to the UK. Of the 40,000 tonnes of PCBs sold in the UK since 1954, only about 400 tonnes are now present in the environment, with the remainder either still in use, transported away from the UK, or degraded/transformed (6). Thus even with the cessation of production and use, risk assessment of PCBs remains an important issue in the UK.

Chemical analysis
Due to the structural similarity of PCBs, compound-specific analysis is a significant analytical challenge. Early methods for PCB analysis involved non-selective techniques such as gas chromatography electron capture detector (GC-ECD). These techniques normally involved the analysis of total PCBs in technical mixtures like Aroclors. However, pure technical mixtures are rarely present in the environment, because PCBs undergo post-depositional changes and are present along with other chemically similar contaminants. PCBs were first detected as interferences in organochlorine pesticide analysis in GC-ECD chromatograms, and it took almost seven years to identify and confirm PCBs as the environmental contaminants (9). Since the 1980s, advances in mass spectrometry have led to the development of congener specific methods. Bench-top quadrupole mass spectrometers became commercially available in the 1980s and are still present in most laboratories today. Quadrupole mass spectrometers are considered to be low-resolution instruments and are typically limited to unit mass resolution, which cannot distinguish between two similar compounds with a difference in atomic mass of less than 0.5 Da. The development of high resolution spectrometers such as time-of-flight mass spectrometers (TOF-MS) significantly improved the selectivity of PCB analysis.

In contaminated-land investigations, PCB are commonly analysed using GC-MS, which provides a relatively quick screen and can show whether a sample has been grossly contaminated. Limits of detection vary with different commercial laboratories but are generally in the range of 10 to 1000 µg kg-1; few labs can provide limits of detection below 1 µg kg-1. This can be a significant limitation, because background total PCB concentrations in UK urban soils are between 0.01 and 40 µg kg-1 (6).  Sample clean-up and high-resolution mass spectrometry techniques can now remove many interfering compounds, such as dioxins, furans and organochlorine pesticides, but they cannot stop some PCBs from co-eluting with other PCBs.

The EC7 congener mixture is a set of PCBs, commonly encountered in environmental samples, consisting of PCBs 28, 52, 101, 118, 153 and 180 (10, 11). The co-elution of the EC7 compounds highlights of the main limitations of PCB analysis using GC-MS: the inability of the chromatography to fully resolve the target compound. The development of comprehensive two-dimensional GC (GCxGC-TOFMS) techniques solved most of these problems. By combining two GC columns with different stationary phases, it adds an extra dimension to the analysis (Figure 2). Using GCxGC-TOFMS, analysts can separate the target PCBs (12) with detection limits in the attogram range (10-18 g) (13). These techniques allow detection and quantification of individual PCB concentrations in humans from just a single blood spot. 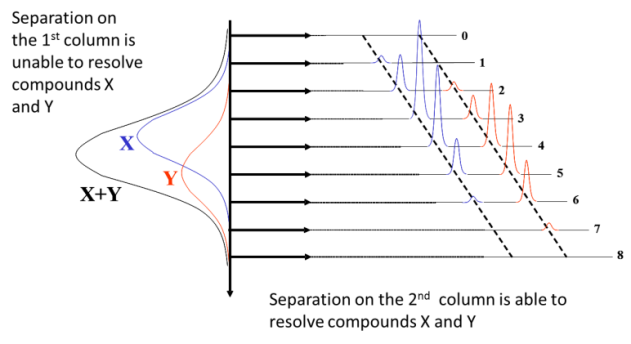 Figure 2. GCxGC analysis enables rapid sampling of the analytes eluting from the first column to be re-injected into the second column. The columns have different stationery phases allowing for an extra dimension of separation. Figure adapted from reference 9.
Human health risk assessment
The European Food Safety Agency (EFSA) (14) states that 130 of the 209 PCB congeners have been reported in various commercial preparations (such as Aroclors) and environmental samples. However, the UK preferred methodology for risk assessment is to look at the WHO12 (PCBs 77, 81, 126, 169, 105, 114, 118, 123, 156, 157, 167 and 189) congeners only. This subgroup comprises co-planar congeners that are believed to show a dioxin-like toxicity. The UK Environment Agency (15) does not consider the WHO12 to be carcinogens. It is believed that most of the toxic effects from dioxin-like PCBs result from their binding to the aryl hydrocarbon receptor, which can cause immune suppression, reproductive and developmental toxicity. Non-dioxin-like PCBs are also toxic and have been shown to elicit neurological, endocrine and immunological effects (14).  The non-dioxin-like PCBs are ~5 times more abundant than the WHO12 in food (14) and ~4 times more abundant in soils (6). Therefore, many other worldwide organisations prefer to monitor both dioxin-like and non-dioxin-like PCBs.

The more common occurrence of EC7 over WHO12 congeners is primarily due to their greater percentage weight concentrations in commercial mixtures. The EC7 congeners make up ~20% by weight of PCBs in commercial Aroclor mixtures, whereas the WHO12 make up <4% by weight (Frame, 2001). Thus, even when taking into account degradation within environmental samples, the EC7 are more commonly found in higher concentrations in environmental and food samples.

The UK approach to human health risk assessment of PCBs is to screen and carry out detailed quantitative risk assessments using only the WHO12. However, due to their toxicity and higher environmental concentrations there is an argument for the non-dioxin-like PCBs to also be considered.  Commercial laboratory analysis of the EC7 is less expensive and more likely to detect PCBs in measurable concentrations than analysis of the WHO12. Therefore, screening of contaminated land using the EC7 and detailed risk assessment using both the EC7 and WHO12 is likely to provide a clearer picture of the risks posed by PCBs to humans and the environment.

When considering human exposure pathways, vegetation uptake of PCBs from soil by plants is generally negligible; PCB concentrations in plants more closely reflect atmospheric deposition (16). Most PCB uptake from contaminated land in the UK is considered to be via the soil medium by direct contact with skin and by direct and indirect soil ingestion, with insignificant inhalation of particulates or vapour. For risk assessment purposes in the UK, only combined oral and dermal exposure is considered, with the assumption that the dominant pathway is the oral route. Therefore, a Tolerable Daily Intake (TDI) is set for this exposure pathway only (15).
Because the dioxin-like PCBs have additive health effects, Toxic Equivalency Factors (TEFs) have been assigned to each congener, based on comparison with the most potent dioxin, 2,3,7,8-TCDD. The TEFs agreed by the World Health Organization (WHO) in 2005 are used by the Environment Agency for human health risk assessment (15). Compared to a TEF of 1 for the dioxin 2,3,7,8, TCDD, the TEFs for PCBs range from 0.1 to 0.00003. When producing a Soil Guideline Value (SGV) for PCBs, the Environment Agency followed many of the findings of Van den Berg et al. (17). The Environment Agency decided that the risks from dioxins/furans and dioxin-like PCBs should not be assessed against one TDI. Instead the congener mixture should be characterised and the fate and transport of each congener modelled. The TEFs for each congener are applied and assessed against an oral TDI for dioxin-like compounds of 2 pg WHO-TEQ kg-1 BW day-1. To produce an SGV for screening purposes, the Environment Agency used the UK Soil and Herbage Survey data (6) to produce an estimate for the composition of the PCB mixture. Therefore, the UK apply an SGV of 0.008 mg kg-1 to dioxins/furans and dioxin-like PCB presence for a residential setting (6% soil organic matter). However, using the same scenario based on the EC7 PCBs (using the toxicity of PCB 118 as a conservative estimate), a screening value of 0.73 mg kg-1 was calculated. Regardless of which method is used to generate a screening value for the EC7, analysis of these compounds could aid decision making process when undertaking human health risk assessments.
Forensic techniques
PCBs are well known for their resistance to degradation. However, once they have entered soils and sediments they can undergo subtle transformations, because not all congeners are degraded at the same rate. This can alter the original PCB signature and complicate source identification. If the processes altering the signature are understood then it may be accounted for and in some instances used to help age the contamination event. Use of environmental forensics techniques in contaminated land investigations can help answer many of these questions that are sometimes overlooked.

Forensic investigations involving PCBs are not limited to soils and sediments and can often involve humans and other animals. This adds further complexity to the source identification process, because further subtle transformations to the PCB signature can occur in animals. Collecting wildlife specimens for PCB analysis presents ethical, scientific and practical challenges. There are alternatives to organ collection and dissection; many investigations into PCB signatures have been undertaken on eggs, feathers, hair and serum (16).
​When assessing human exposure to PCBs, an individual with background exposure will have high proportions of PCBs that are more resistant to biotransformation and elimination. These include PCBs with a higher degree of chlorination and co-planar PCBs with no ortho chlorines. However, the exact position of chlorine atoms on the biphenyl is also important in determining the retention of PCBs in humans (18). This information can be used to account for changes in the PCB signature between source and receptor. The extent of these changes could also be used to help age date human exposure to PCBs. When undertaking environmental forensic investigations of PCBs in humans and other animals it is important to consider how the congener profile may be altered between the source and receptor.
Analytical results from the receptors themselves will provide additional and potentially better information on the risks posed by PCBs. The results can allow for a better estimation of risk to the individual along with the potential for source identification and age dating the exposure.