Rowena Fletcher-Wood
Science Oxford
rowena@scienceoxford.com
ECG Bulletin February 2017
In a previous issue of the ECG Bulletin, the editors wrote about the possible detrimental effects of neonicotinoids on pollinator populations and the impacts on biodiversity and human food security (1). In interviews with Dr Ben Woodcock (Centre for Ecology and Hydrology) and Professor Simon Potts (Reading University), I asked about the evidence supporting a risk to food security, and the role played by bees in pollination.

About 88% of nutritionally important food crops such as fruits, vegetables, nuts and seed crops are pollinated by animals (2). Neonicotinoid impacts on pollination services will thus have widespread consequences for ecosystems and species biodiversity, and also affect human food security. Animal-pollinated plants contribute most of the vitamins and minerals in our diet. Thus, although calorie-containing foods such as wheat and rice are mostly wind pollinated, the nutritional core of our diet could be threatened by falling bee numbers (if bees, which pollinate three quarters of the world’s food crops, are representative of other pollinator species). 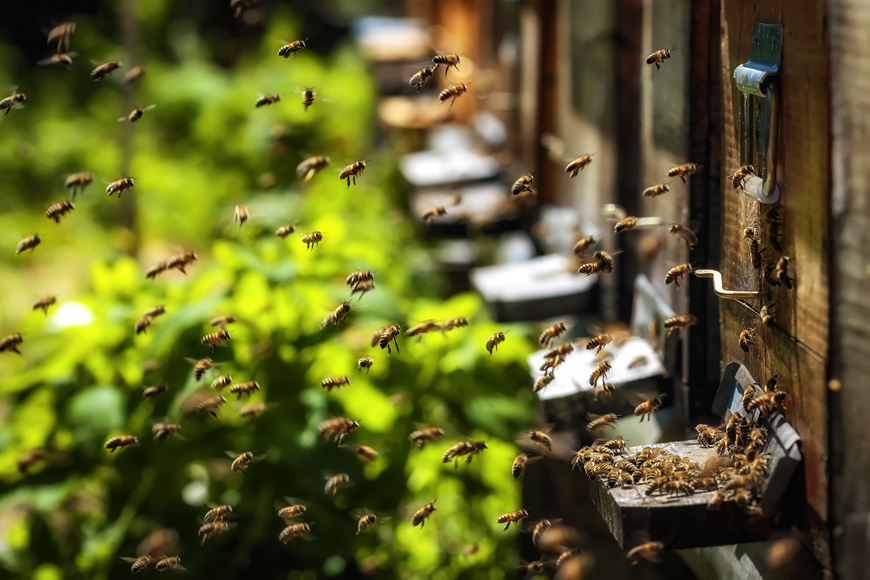 Honey bees return to their hives. Recent studies have investigated the impacts of neonicotinoid pesticides on honeybees and other insect pollinators. Credit: Photografiero/Shutterstock
In his interview, Dr Ben Woodcock explained that he was part of the CEH cohort involved in a large-scale, independent study of neonicotinoid impacts commissioned by pesticide giants Syngenta and Bayer (3). The study took place over one growing season at eleven sites in the UK, Germany, and Hungary, each containing three sets of 40  to 70 hectare oilseed rape fields. The field sizes were a compromise between honeybee foraging ranges and the limits set by regulatory authorities when applying pesticides that were under a temporary ban. In each set of three fields, one field was planted with seeds treated with Clothianidin, the second with seeds treated with Thiamethoxam, and the third with untreated seeds. Six honeybee hives, twelve bumblebee colonies, and fifty cocoons of a solitary Red Mason bee were placed at each site. The study sparked public criticism because of the perceived conflict of interest from using funding from the pesticide giants Syngenta and Bayer. The results have been submitted for peer-review publication.

Simultaneously, Dr Woodcock contributed to a paper that assessed the long-term impacts of field-level doses of neonicotinoids (4). This paper applied statistical methods (multi-species dynamic Bayesian occupancy analysis) to 18 years of UK bee distribution data, spanning 62 species of wild bee and supplied by the Bees, Ants and Wasps Recording Society of the Biological Record Centre. This robust body of qualitative data is collected chiefly by amateur entomologists with specific bee expertise. Bee distributions were correlated against the locations of neonicotinoid-treated oilseed rape and demonstrated a relationship between neonicotinoid use and large-scale loss of populations, particularly among species that forage on oilseed rape.

As Dr Woodcock explained, this second study is a valuable companion to the first because small and large-scale studies only jointly provide results that can elucidate the full impact of neonicotinoids on pollinators. Many field studies are limited to relatively small areas of treated crops for practical reasons and may not capture the full extent of bee-neonicotinoid exposure, as bees can forage over large areas (honeybees regularly forage 2 km from hives). Other field studies are limited to single species. Across time scales of one to two years, natural changes in animal populations, weather conditions and variation in real world agricultural conditions mean that measured responses may be dominated by environmental conditions. On the other hand, laboratory and small-scale field experiments allow better control and replication that is not achievable in larger-scale correlative studies. In the latter case, it is much harder to control for environmental differences, and results are often influenced by a wide range of factors (such as destruction of habitats to produce fields for oilseed rape), many of which are not under investigation. This is a classic problem with correlative studies (3).

In his interview, Professor Simon Potts told me that he was seconded to the UN for two years to co-chair a report on “Pollinators, Pollination and Food Production,” which evaluated the global evidence on the causes of pollinator declines and identified effective policy and practice responses to mitigate pollinator losses (5). He also took part in a study assessing the effects of a neonicotinoid on the pollination services that bumblebees provide to apple trees, a crop of global economic significance (2). Under semi-field conditions, pre-exposure of bumblebees to 10 ppb Thiamethoxam pesticide led to fewer visits to the apple flowers. This not only meant less efficient pollen collection, but also impacted the apple trees, producing fewer seeds. Seeds are considered a key indicator of quality for most apple varieties. The study suggested effects were likely to be on the level of the bee colony, rather than individual bees. This could have serious implications for other crops and ecosystems.

Professor Potts argued that if effects on bees can be extrapolated to other pollinators, these results could have worrying consequences. Loss of pollinators could be a major challenge for global food security, possibly entirely driven by bees. Some foodstuffs like chocolate (primarily pollinated by midges) and coffee on the global market could fall and could return to being luxury, and consumers would more generally have more limited choice and scarcer access to micronutrient rich foods. This could have further sociological effects, dividing consumers between those able and unable to afford these products and increasing the risk of malnutrition amongst lower income earners, especially in developing countries.

Neonicotinoids contribute 80% of the world’s seed treatment market and 20% of the world’s pesticide market. Many crops that they are applied to, such as oilseed rape, cannot be easily grown organically. The “cabbage” of cereal crops, just about anything eats rape, making it a work-intensive, low-yielding crop to grow without the assistance of pesticides. But this does not mean the effects of neonicotinoids cannot be mitigated. Overall pesticide use can and should be reduced worldwide. Professor Potts and Dr Woodcock recommended an Integrated Pest Management approach that combines pest monitoring with a range of pest control methods, such as crop rotation, field margin management, and biological control (6). This means reforming our paradigm of pesticide use and moving away from continuous prophylactic application to last-resort use only when other strategies are insufficient. Another way to reduce risk is with new technologies, such as reduce-drip nozzles on pesticide sprays to minimise waste and avoid high concentration drops (6).

But these interventions may not enough on their own to protect bees and other pollinators. Professor Potts and Dr Woodcock suggest that ecological intensification of farming could make a significant difference.  This means working alongside biodiversity to increase soil and crop fertility, such as by creating land strips populated by wild flowers and supporting beneficial invertebrates (7). Research suggests that even if you take out 8% of land for these uses, the boost in native biodiversity means a boost in pollination and natural predators like ladybirds that eat aphids, and in turn sustainable intensification of crops – producing just as much product (5). We can also help bees directly by supporting habitats, creating nesting sites and introducing foraging resources that foster more robust populations better able to stand up to the pesticides they do encounter (7).

However, changeover requires work, and farmers are naturally risk-averse. It may be that top down regulatory methods are required to implement ecological farming. Some, like my veg box providers, have turned to organic farming instead, but this has its own problems: organic farming usually requires more land for the same volume of produce and so is less efficient, and as most of our remaining uncultivated land is high value nature sites, these farms would be unable to expand without causing further loss of habitat and damage to native biodiversity.

So it looks like promoting ecological intensification the key – this doesn’t mean banning pesticides, but it does mean encouraging adjacent biodiversity and use smarter technology and methods.