John McArthur and the London Arsenic Group
Department of Earth Sciences, University College London
ECG Bulletin September 2011​
The detrimental health effects of arsenic-contaminated drinking water have once again hit the headlines, with the publication in early 2010 of a comprehensive epidemiological study of the effects of As in drinking water.  The study shows that the effects may be worse than feared, making it even more urgent to understand what controls the distribution of As in the subsurface as a prelude to mitigation of pollution in water supplies and the future safe development of affected aquifers.  In early 2009, we reported on a new hypothesis that might explain that distribution; it had been proposed by researchers of the London Arsenic Group (LAG).  Here we report on the first test of that hypothesis, as explained by Professor John McArthur of UCL and a member of LAG.

River sediments and aquifers
Sediments are laid down along the lower stretches of rivers as they slow their rate of flow, and in deltas where the rivers are stopped short by the sea, and so deposit their sediment load.  The sediments are often sandy or silty, and so are not just porous but also permeable. The water within the pores may be of a quality fit for domestic use, and be pumped out, or bailed out in a well, from the sediments that are therefore termed an ‘aquifer’. Aquifers laid down by rivers are termed ‘alluvial’, or ‘deltaic’ if they happen to form a river delta. As deltas and river banks were amongst the first places on Earth to be colonized, and host many of the world’s major cities, groundwater from alluvial aquifers worldwide provides a good proportion of the world’s supply of drinking water.  The source is particularly important in SE Asia, where many regions have a dry season e.g. the Ganges/Brahamaputra delta region.

Arsenic pollution of groundwater. Throughout history, mankind has known that digging a hole in the ground is a good way to obtain water.  If that water tasted good, it was assumed safe for public supply. This notion was coming under sporadic fire after 1950, but as late as 1970 was still prevalent.  The belief led to the promotion, especially in Bangladesh and West Bengal, of the use of groundwater as a safe alternative to microbiologically-polluted surface water for domestic supply. But by the late 1980s, suspicion had arisen in West Bengal that the water might be polluted with As, so a wide-ranging report on the matter was prepared (PHED 1991).  Even so, the matter was largely ignored until Dipankar Chakraborti, of Jadavpur University in Kolkata, West Bengal, raised the lid off the boiling pot by arranging a conference on the issue in 1995.  As a consequence of the conference, money was made available by the UK’s ODA for a survey of groundwater across much of south and central Bangladesh, the country thought most affected.  The survey found that around 25% of wells contained > 50 µg/As, the local water quality limit, whilst half contained more that 10 µg/As, the maximum recommended by the World Health Organization.  Since 1995, the problem of As pollution has revealed that the pollution is severe and global in extent, affecting at least 30 deltaic and coastal aquifers worldwide (Ravenscroft et al., 2009 and references therein).

The harm being done. In the deltaic aquifers of SE Asia, concentrations of As are commonly 50 to 200 µg/L and values up to 4,000 µg/L have been recorded.  Arsenic dissolved in groundwater in these amounts is odourless, tasteless, poisonous, and carcinogenic. At such concentrations, its poisonous effects take years to show.  Which is why in 2000, Alan Smith, epidemiologist at UC Berkley, wrote that the As-pollution of groundwater in Bangladesh was “the worst mass poisoning of a population in history”.  He predicted that, if those drinking water containing > 500 µg/L of As continued to do so, by 2010, one in ten of their deaths would be arsenic-related.  Now, in 2010, the results have been published of an epidemiological study of  consumers in Araihazar, an As-polluted region of east-central Bangladesh.  The study, by staff of Chicago and Columbia Universities, has made the significant claim that, in a cohort of 11,746 individuals studied for 10 years, “an estimated 21% of all deaths, and 24% of deaths associated with chronic disease, could be attributed to arsenic exposure (>10 μg/L) in drinking water.” The figures are more alarming even than Alan Smith’s dire prediction for 2010.

Distribution of arsenic pollution. The mechanism of As pollution was revealed in 1998. But what controls the patchy distribution of As-pollution is less clear. That sea level has exerted an influence on both the vertical and lateral distribution of As pollution was shown by Peter Ravenscroft, and his team at Mott MacDonald International in Dhaka and the University of Dhaka (in DPHE 1999).  They showed that the As pollution was confined to sediments laid down after a low-stand of sea level that occurred around 20,000 years ago. That was the most recent of many times at which the world’s ice-caps reached a maximum extent, so the time is termed by geologists the Last Glacial Maximum (LGM; ≈20,000 years BP). Ravenscroft showed that wells drawing water from sediments deposited as sea level rose after the LGM were likely to be polluted by As.  Those, mostly deep wells (>150m deep) that drew water from  older sand deposited before the LGM were As free.

The palaeosol model of arsenic pollution
An hypothesis to explain the distribution of As-pollution in the Bengal Basin. Ravenscroft’s team explained the distribution of As-pollution at the 10-to-100 km scale, but not the pronounced inhomogeneity found at lesser scales. Developing Ravenscroft’s ideas, an hypothesis reported on in the ECG Bulletin in early 2009 (McArthur et al., 2008) did just that.  The model proposed that as sea level fell by about 120 m, as the last ice-age developed to its maximum between 125 ka and 20 ka (at the LGM), the exposed coastal areas were subject to subaerial weathering. Rivers incised into the exposed coast to maintain their base levels, and the exposed regions between the rivers, termed the interfluves, weathered and  developed a capping of impermeable clay soil, termed a palaeosol. Underlying sands were weathered, as groundwater flowing through them to oxidise Fe(II)-bearing detrital minerals and turn the sands brown from the iron-oxides produced. This weathered, oxidized, and eroded, landscape, capped by the LGMP (Last Glacial Maximum Palaeosol), was buried by later (post LGM) sediments as sea level rose between 20 ka and 6 ka to near its present level.  The rise pushed the sea-shore landward, backed up the rivers, and made them deposit their sediment load so as to build the modern delta we call the Bengal Basin (Bangladesh and West Bengal).  The key postulate of the ‘palaeosol model’ is that the weathering of interfluves between 125 ka and 20 ka capped the oxidised Pleistocene brown sands with an impermeable palaeosol, termed the Last Glacial Maximum Palaeosol (LGMP). The LGMP would have formed regionally, if discontinuously, and so should strongly influence groundwater flow, thus controlling the distribution of As-pollution. It would do so by preventing access to underlying aquifers of As-pollution from overlying groundwater, or access of dissolved organic matter that could reduces As-bearing sedimentary iron oxides and so release As to groundwater.
Testing the palaeosol model of As-pollution. The model was developed for an area in West Bengal that was less than 1 km2.  Members of LAG were aware that it had to be demonstrated to apply more widely before it would gain acceptance worldwide, so they set out to test the models predictions over a bigger area.  The London Arsenic Group has now tested that model across 102 km2 of  southern West Bengal and found that it could not falsify the hypothesis –  so it passes its first test.

The predictions were that were that where the LGMP was found in the subsurface, the underlying aquifer would be As-free, and that where As-pollution was found, the LGMP would be absent. And that is just what they found. In the subsurface under 47 km2 of contiguous country in which well water was As-free, drilling proved the existence of the LGMP capping brown sand aquifers (a palaeo-interfluve setting), as predicted by the palaeosol model (Figure 1). In flanking regions, where concentrations of As in well water mostly exceed 50 µg/L, drilling proved the absence of the LGMP and that the aquifer consisted of grey palaeo-channel sands.  Their results appear to validate the palaeosol model across 102 km2 of the study area. The LAG group are now keen to test that model over a larger area, in other localities. 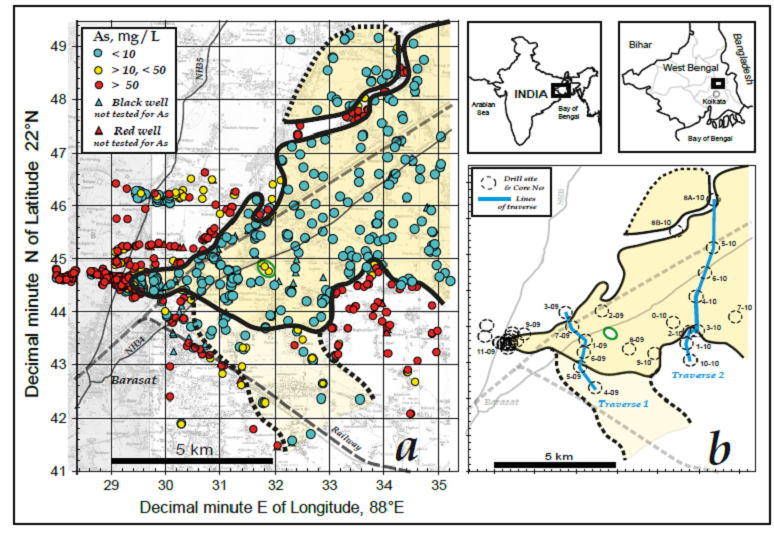 Figure 1: The field area. Base map is 1-inch toposheet of West Bengal circa 1975. Geographic reference system used is WGS84 in degrees and decimal minutes. Key in upper left. a. Concentrations of As in well water. Solid black line encloses area where As in groundwater is ≤ 10 µg/L, and drilling proved the LGMP to be present. Southern dotted, black, extensions outline the area where erosion has cut out the palaeosol but left underlying Late Pleistocene brown sands largely undisturbed. b. Drilling sites for proving subsurface sedimentology
Mapping As-pollution with well-colour.  McArthur’s team also came up with a surprise.  Although it was known that As-polluted water was rich in dissolved Fe (up to 30 mg/L) and that unpolluted water was often rich in Mn (up to 9 mg/L), no one before had taken much notice of the fact that precipitation of these elements as oxides gave different colours to wells: iron oxide-coloured wells red; manganese oxide-coloured wells black, as water regularly spilt and splashed over the well and its concrete surroundings (Figure 2).  By applying this basic observation in a predictive way, the team was able to map As-polluted (palaeo-channel) areas and As-free (palaeo-interfluvial) areas with unprecedented speed without even analyzing wells for As. Checks using As analysis revealed a prediction rate that was 94% successful for As-free wells and 86% successful for As-polluted wells – and might have been better if, like some 10% of the male population, McArthur did not suffer from a degree of colour blindness. 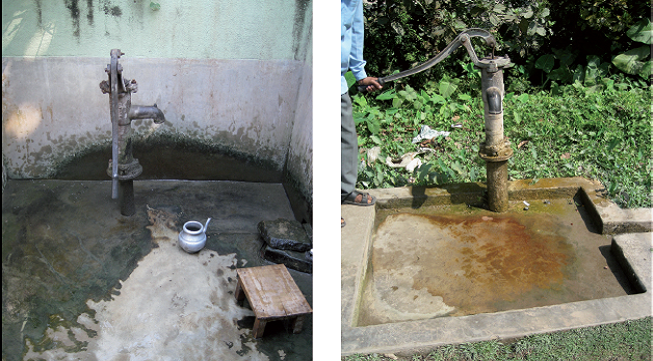 Figure 2: The colour of well-stain: a. Black colouration of a well, well-screen, or domestic utensils, derives from precipitation from groundwater of manganese oxide and indicates that a well is As-free and, in southern West Bengal, also that it is screened in the shallow aquifer. b. Red colouration derives from precipitation from groundwater of iron oxide and indicates the presence of As > 10 µg/L in shallow wells
Palaeo-interfluvial aquifers: consequences for water supply.  Where it is present, the LGMP, which is effectively impermeable, protects the underlying palaeo-interfluvial aquifer from downward migration of mobile pollutants, such as arsenic, nitrate, pesticides, NAPLs and DNAPLs, The LGMP diverts recharge to flow laterally to palaeo-channels, from where it flows downward and then laterally into the palaeo-interfluvial aquifers. The As in this recharging water is stripped from the groundwater by sorption onto the sedimentary iron oxide in brown sands (Figure 3). The palaeo-interfluves thus act as giant, in situ, As-removal filters. The impermeable LGMP, and the sorptive capacity for As of the brown palaeo-interfluvial aquifers, together provide a dual protective barrier against As-pollution. The retardation factor applicable to the lateral migration of As into the palaeo-interfluvial aquifers has been estimated to be between 10 and 300 – a large range in need of refinement.  But given these extremes, the As-free palaeo-interfluve mapped by LAG is, over all by its peripheral margin, safe from the threat of As pollution for decades to hundreds of years (Figure 3).

Figure 3: The conceptualization of the risk of As-pollution in palaeo-interfluvial aquifers in terms of travel times for As. Note the logarithmic horizontal scale. Groundwater flow rate is 30 m per year at palaeo-interfluvial margins. The impermeable pa-laeosol prevents vertical recharge to palaeo-interfluves, so recharge moves laterally from flanking palaeo-channels, losing As by sorption as it does so. Note that the LGMP affords protection to the palaeo-interfluvial aquifer against ingress of any mobile pollutants, including nitrate, pesticide, DNAPL and NAPL, not just against ingress of natural As-pollution.
JOHN McARTHUR
Department of Earth Sciences, University College London, Gower Street, London UK  WC1E 6BT
Home page: www.es.ucl.ac.uk/people/mcarthur/
London Arsenic Group: www.es.ucl.ac.uk/research/lag/as/