Vernon Somerset
Council for Scientific and Industrial Research (CSIR), South Africa
vsomerset@csir.co.za
ECG Bulletin September 2011​
Monitoring trace metals in the environment
Concentrations of heavy metals (and some organic contaminants) are increasing in parts of the environment as a result of anthropogenic activity. For metal contamination, particular attention has been paid to the rapid diffusion and speciation of heavy metals in the environment. As a consequence, many novel methods for the determination of metals at trace and ultratrace levels have been introduced. Metal contaminants tend to concentrate in aquatic matrices – such as suspended matter, sediment and biota – resulting in their presence in the aquatic food chain. In turn, there is an increasing risk to human health if vegetables, fruit and meat with high levels of metal contaminants are consumed. Therefore, the continuous assessment and monitoring of trace metals in the environment is essential to gain a better understanding of the individual and interactive effects of the trace metals in water resources (rivers, lakes, dams, reservoirs). National and international legislation set limits on the maximum allowable concentrations of trace metals in the air, water, and aquatic ecosystems. In order to regulate environmental legislation, routine measurements of metals in the environment are needed to assess compliance by different organisations, businesses, and industries. Monitoring and measurements also require accredited  sample collection and analytical procedures. Setting the standard, and assessing the compliance to the standard, is important and allows for an accredited assessment of the environment (Somerset, 2009; Locatelli and Torsi, 2001).

Various established and accurate methods exist for the simultaneous analysis and determination of metal ions at trace levels. Instrumentation for these methods encompasses inductively coupled plasma-mass spectrometry (ICP-MS),  X-ray fluorescence spectrometry (XRF), atomic absorption spectrometry (AAS), and atomic fluorescence spectrometry (AFS), coupled to a range of detectors for specific problematic contaminants. These methods are highly efficient, but they require tedious sample pre-treatments, highly qualified technicians and sophisticated instruments. Also, they  can be time consuming and are not suitable for field analysis of multiple samples (Somerset et al., 2010; Cauchi et al., 2008; McGaw and Swain, 2006). Stripping voltammetry has emerged as an alternative and robust technique for trace metal analysis of environmental samples.

Stripping voltammetry
The use of stripping voltammetry as a technique for metal determination at trace levels has increased in popularity over the last decade, with various electrode configurations now available to perform the analyses. The effectiveness of this technique can be attributed to the remarkable sensitivity of stripping voltammetry and its multi-element and speciation capabilities, coupled with low cost and suitability for on-site measurements (Locatelli and Torsi, 2001). Furthermore, electrochemical stripping analysis has been successfully established as a trace analysis technique for more than three decades. During this time many advances have been made in different areas of the technique with specific emphasis on various electrode assemblies for assorted contaminants. Stripping analysis is an electro-analytical technique and makes use of a two-step approach, consisting of a “pre-concentration” step of the analyte on the surface of a working electrode. This is followed by the detection step where the metals are stripped away from the electrode during an appropriate potential scan. The accumulated analyte is normally detected and quantified using voltammetric or chronopotentiometric techniques. Stripping analysis provides useful information on the total metal content of a sample matrix, but also allows characterisation of the metal ion in its different chemical forms, where applicable (Economo, 2010).

Stripping voltammetry combined with disposable sensors, manufactured using screen-printed technology, has become very popular in the last two decades because of its simplicity, affordability, and ease-of-use. This process involves the sequential deposition of layers of different conductive or non-conductive inks on a variety of inert substrates. Screen-printed carbon electrodes (SPCEs) in stripping voltammetric techniques allow a high degree of sensitivity and selectivity in metal ion determination. The production of screen-printed electrodes  has enabled the mass production of disposable electrodes, and is a promising route for inexpensive and yet highly reproducible chemical sensing devices (Somerset et al., 2010; Palchetti et al., 2005).

In Figure 1, a screen-printed sensor is connected to a potentiostat or integrator. The resulting stripping voltammogram can further be interpreted to determine the concentration of the analyte of interest. The use of screen-printed electrodes (SPEs) has simplified the in situ analysis of environmental samples for heavy metals. Samples may also be screened on site before they are taken to the laboratory for further analysis. Because the SPEs can be connected to portable and compact (hand-held) battery-operated stripping analysers, commercialisation of these devices is advancing, and several models now allow the detection of metal ions in environmental samples. 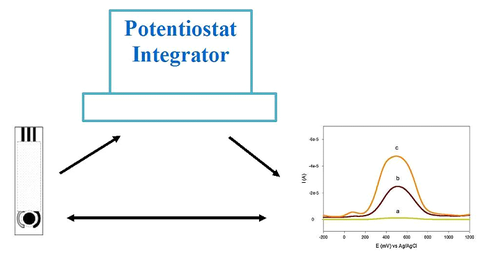 Figure 1: Scheme of a screen-printed sensor that can be connected to a potentiostat, when in operation will deliver a stripping voltammogram that is used to determine the concentration of an analyte(s) in a sample matrix
Continuing technological changes in electrochemical sensor techniques will play an important role in the development of sensor detection systems for the analysis of environmental samples and other materials. The introduction of nano-materials is another factor that will contribute to advances in electrochemical devices. Furthermore, progress in microelectronic and microfluidic technologies has permitted the miniaturisation of analytical systems.  This in turn reduces energy requirements and sample volumes, resulting in reduced reagent consumption and waste generation, leading to increasing sample throughput (Farre et al., 2009).

Conclusion
The demands for rapid, reliable and inexpensive sensors for the measurement of metals in biomedical, environmental, and industrial samples in the last decade have resulted in the introduction of new techniques in stripping voltammetry. With improvements in detection, the adoption of stripping analysis for environmental monitoring has much to offer analytical and environmental chemists.
eferences
Cauchi, M., Bessant, C., Setford, S. 2008. Simultaneous quantitative determination of cadmium, lead, and copper on carbon-ink screen-printed electrodes by differential pulse anodic stripping voltammetry and partial least squares regression. Electroanal., 20(23): 2571-2577.