Ozone’s reactions with alkenes are important sources of free radicals (including OH) and particulate material in the Earth’s atmosphere. A particular area of interest concerns the chemical mechanisms and product branching ratios of the ozonolysis of alkenes.
2. Kinetic and thermochemical studies of the ClO + ClO self-reaction
Valerio Ferracci and David M. Rowley
Department of Chemistry, University College London
Work by von Hobe et al. published in 2007 [1] challenged the then current understanding of the ClO dimer’s role in catalytic cycles leading to stratospheric ozone loss. Our study focuses on the temperature dependence of the equilibrium constant of one of the key reactions in this process, ClO + ClO + M ↔ Cl2O2 + M (1, −1). ClO radicals were generated via laser photolysis of Cl2/Cl2O/air mixtures and monitored via ultra-violet absorption spectroscopy using a CCD camera. The equilibrium constant was determined from the ratio of forward and backward rate coefficients Keq=k1/k−1 over the temperature range T = 256.55–312.65 K. Figure 2 compares the temperature dependence of the equilibrium constants from this work with previous studies.

The above Arrhenius expressions for channels (1b) and (1d) are, respectively, greater than and in good agreement with previous work [2].

Whole Air Samples collected during various atmospheric field campaigns between 2009 and 2010 have been used to measure the mixing ratios of volatile organic compounds (VOC) above the UK. Boundary layer, including urban plumes, and free tropospheric samples were collected during day and night flights aboard the Facility for Airborne Atmospheric Measurements’ BAe 146 research aircraft. Samples were analysed for C2 to C8 VOCs using a dual-channel gas chromatograph coupled with flame ionisation detection (GC-FID).

Current work focuses on the use of hydrocarbon ratios as a tool to interpret chemical and transport processes. The role of nitrate radical chemistry has been assessed by comparing VOC data from day and night flights. These data clearly indicate a deviation from hydroxyl chemistry and an increasing influence of the nitrate radical initiated VOC oxidation at night.  In addition, long-term measurement of free tropospheric VOC concentrations indicates a clear seasonal trend with winter maxima and summer minima, confirming the role of hydroxyl chemistry as the dominant sink for most VOCs during the daytime.

Emissions of volatile organic compounds from the global biosphere (bVOCs) are estimated at 1150 TgC/yr, nearly an order of magnitude higher than anthropogenic fluxes. The most significant of these bVOC compounds is isoprene (C5H8) which has emissions of around 500 TgC/yr and is highly reactive, with an atmospheric lifetime of about 1.5 hours. Isoprene oxidation provides a source of peroxy radicals that fuel production of tropospheric ozone, and leads to formation of aerosol particles. Ozone and aerosols impact both air quality and climate.

Organic aerosols are produced in the atmosphere by photochemical particulate formation, and are known to have detrimental effects on air quality (and thus human health) and local climate. Many of the oxidized volatile organic compounds (OVOCs) that deposit onto existing aerosol, or condense to form secondary organic aerosols (SOA), are toxic and/or carcinogenic. So to establish SOA’s impacts upon human health, it is vital to be able to monitor and understand SOA formation in a range of environments. Our research investigates the chemistry and physics of aerosol and photochemical smog formation in urban environments using a unique combination of absorption spectroscopy and mass spectrometry.

Proton transfer reaction mass spectrometry (PTR-MS) is already an established technique for the sensitive detection of many gas-phase OVOCs [1]. A schematic diagram of the PTR mass spectrometer developed at Leicester University is shown in Figure 4. However, PTR-MS is unable to distinguish between molecules of the same mass, leading to potentially ambiguous detection of certain atmospheric species. By utilising PTR-MS together with broadband cavity enhanced absorption spectroscopy (an ultra-sensitive type of optical absorption spectroscopy [2], which is highly specific to OVOCs such as glyoxal), we are studying the complex array of gaseous organic oxidation products that lead to SOA production. The aim of our research is to elucidate underlying chemical degradation mechanisms leading to OVOCs and hence identify potential species contributing to incipient aerosol formation and growth in the urban atmosphere. 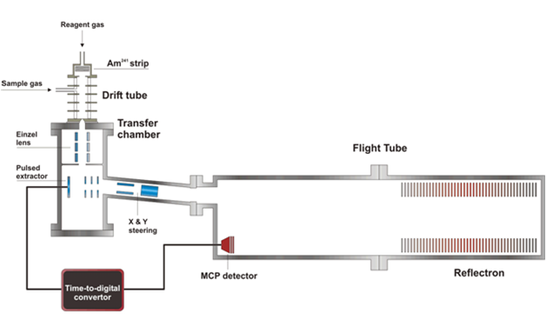 Figure 4: Schematic of the PTR-ToF mass spectrometer. Ambient air is sampled continuously into the instrument. VOC molecules are protonated by reaction with hydronium reagent ions (H3O+) and are detected as (VOC–H)+ molecular ions using time of flight mass spectrometry. Diagram courtesy of Dr K. Wyche, Leicester University.
6. Constraining the budgets of hydrogen and carbon monoxide through in situ measurements and modelling
Aoife Grant, Alexander T. Archibald, Simon O’Doherty, and Dudley E Shallcross
School of Chemistry, University of Bristol
Hydrogen (H2) is the second most abundant atmospheric trace gas. It acts as an indirect greenhouse gas by removing the hydroxyl radical and thus increasing the lifetimes of other greenhouse gases. Recent increased interest in H2 is due to its possible introduction as a “clean energy” alternative fuel. However, its current atmospheric budget is poorly constrained, particularly its source from primary and secondary emissions. Carbon monoxide (CO) is central in controlling the abundance and distribution of the hydroxyl radical. The secondary production of CO from the oxidation of volatile organic compounds (VOCs) remains the most poorly constrained sector of its global budget.
7. Trace metal contamination of lakes and ponds in London
C. J. Hall, N. L. Rose, and A. W. Mackay
Environmental Change Research Centre, University College London

London has a long history as an urban and industrial centre, and air pollution has been a concern since the 17th century. Trace metals are one type of air pollutant that at certain concentrations can be harmful to organisms, including humans. Historic levels of metal contamination within the city are being determined by analysis of sediment cores from seven lakes.
8. CityScan: the scanning imaging DOAS system
R. Graves (1), R. Leigh (2), C. Whyte (2), and P. S. Monks (1)
1. Department of Chemistry, University of Leicester
2. Department of Physics and Astronomy, University of Leicester
Air quality is an international issue and the subject of several European directives [1] on pollution levels because, at high concentrations, atmospheric pollutants can have significant effects on human health, ecosystems and the climate. The main sources of air pollutants such as NOx (NO2 and NO), CO, volatile organic compounds and particulate matter in the UK are motor vehicles and power generation [2]. It is becoming increasingly important to measure changes in these air pollutants, particularly in urban environments where these pollutants can be present at highly elevated levels.

A scanning imaging differential optical absorption spectroscopy (DOAS) system called CityScan has been developed at the University of Leicester. CityScan will be used to monitor air quality in urban areas by measuring (i) NO2 concentrations [3], and (ii) the oxygen dimer absorption signal which provides an indicator of aerosol optical depth [4]. This instrument will be deployed to study air quality in several urban areas, including Leicester and London and at a variety of point sources. CityScan will have significant advantages over currently available technologies [5] and will produce near real-time, three-dimensional maps of NO2 over entire urban areas, providing unprecedentedly detailed information on air quality.
[1] Directive 2008/50/EC of the European Parliament and Council on ambient air quality and cleaner air for Europe.
[2] AEA Technology for DEFRA, Air Pollution in the UK 2009 (2010).
[3] Kramer, L. et al., Journal of Geophysical Research, 2008, 113, D16S39.
[4] Wagner, T. et al., Journal of Geophysical Research, 2004, 109, D22205.
[5] Whyte, C. et al., Atmospheric Measurement Techniques, 2009, 2, 789-800.

Atmospheric CO2 concentrations have been retrieved from measurements made in the near infrared by the SCIAMACHY instrument, using the Full Spectral Initiation (FSI) WFM-DOAS algorithm. A methodology has been developed to investigate regional scale carbon budgets, by coupling the UK Met Office’s NAME dispersion model with satellite measured CO2 and top-down / bottom-up carbon flux models.

The method was used in forward mode, where top-down surface flux information from CarbonTracker was combined with the background CO2 mixing ratio to obtain an atmospheric concentration. Synthetic testing of the initialisation method demonstrated that a strong correlation coefficient (R2 ≈ 0.9) between the forward modelled and satellite observed atmospheric CO2 fields can be achieved.
10. A study of Martian atmospheric chemistry through laboratory and computer-based simulation
Maria K. D. Duffy, Stephen R. Lewis, and Nigel J. Mason
Department of Physics and Astronomy, The Open University

The observation of a methane plume in the atmosphere of Mars caused much interest in the role of trace gases in the Martian system [1]. Investigating the way that trace species such as ozone, water and HCl are cycled in the atmosphere will give insight into the interactions taking place between the atmosphere, lithosphere and any potential biosphere of the Red Planet. Current Mars General Circulations Models (MGCMs) with coupled chemistry modules focus on odd-hydrogen (HOx) and odd-oxygen (Ox) chemistry and so are not yet capable of simulating more complex chemical interactions.

In the current project, a Mars environmental simulation chamber containing a Mars-like gas mixture with added trace gases will be irradiated by a solar simulator. The effect of the addition of a Mars-analogue regolith on the reaction mechanisms and rates will be investigated. The reactions identified in the laboratory will then be added to the chemical module of the Laboratoire de Météorologie Dynamique (LMD)-MGCM [2], [3]. Numerical experiments will be conducted to identify sources of trace species on the surface, by conducting trial releases and observing the species’ distribution after a set period of time. The interaction of the current chemical module with new reactions as determined by the laboratory simulations will also be investigated.

Abstracts provided by Forum delegates: edited by STEPHEN BALL and BILL BLOSS
The ECG plans to hold the next Atmospheric and Environmental Chemistry Forum in winter 2011/spring 2012.