Arie Jan Haagen-Smit and the history of smog

Peter Brimblecombe
School of Environmental Sciences, University of East Anglia
ECG Bulletin January 2012​
​Air pollution in the 20th century was characterised by a transition from urban air dominated by primary pollutants to one where secondary pollutants became more important. These newer pollutants involved chemical reactions and species that were not easy to unravel compared with those from combustion sources. One of the first urban environments where this shift to secondary sources of air pollution was recognised was Los Angeles.
Some people blamed the Southern California Gas Company’s artificial rubber plant which used butadiene, but the complaint was muted because of the strategic importance of rubber to the war effort. Butadiene is highly reactive, and may have been a localised source of smog, but it was probably not entirely to blame because even when the plant was shut down, the smog continued (Dunsby, 2003).

Although the word smog (Smoke + fOG) was chosen to describe the air pollution of Los Angeles it contained neither smoke nor fog. However, even in the 1940s there was an awareness of the “peculiar nature” (Krier and Ursin, 1977). Despite an absence of smoke, ironically Los Angeles set up a Bureau of Smoke Control in 1945. After the war smog continued to be a serious problem, and the Los Angeles Times invited Raymond Tucker, a pollution expert from St Louis, to investigate the smog. He had been successful in solving Pittsburgh’s smoke problems, so seemed a good choice. Tucker argued that the automobile was not really the cause as there was virtually no sulfur in the fuel. This failed to recognise that Los Angeles smog was something entirely new.

As in London, where the Victorian smogs became indelibly associated with the growth of detective fiction (from Sherlock Holmes onwards), Los Angeles was birthplace of the hard-boiled detective (Brimblecombe, 1990). Smog appears frequently although in the archetypical Philip Marlowe stories of Raymond Chandler smog is not really described in detail until The Long Goodbye of 1953. In other Hollywood fiction, smog came to represent a kind of explanation of evil intent:
Cutting a metaphorical knife through the Los Angeles smog and its fictional manifestations came the scientific reasoning of the Dutch-born natural product chemist and biochemist, Arie Jan Haagen-Smit.
The early research highlighted that smog is not only injurious to health but it also damages materials such as rubber. Haagen-Smit had devised a simple test for the presence of ozone in air by observing the deterioration of ‘bent’ (i.e. stressed) rubber tubing (polyisoprene) in an air sample. Smog is also a lachrymator – later ascribed to the presence of peroxyacetyl nitrate. Haagen-Smit published his work on the origins of Los Angeles smog in the early 1950’s (e.g. Haagen-Smit, 1952; Haagen-Smit et al., 1953) where he referred to both ozone and peroxides in the atmosphere. Perhaps more importantly he realised the policy implications and wrote: “a proper evaluation of the contribution of air pollutants to the smog nuisance must include not only the time and place of their emissions, but also their fate in air”. He also contributed to popular articles in magazines such as Life and Scientific American where he wrote: “the Los Angeles atmosphere differs radically from that of most other heavily polluted communities” (Haagen-Smit, 1964). His picture of the smog was relatively simple, but was opposed by the automobile manufacturers and the oil companies. They sponsored research by the Stanford Research Institute, which ultimately confirmed the role of automotive fuel in creating the smog.

Our modern understanding of smog chemistry derives from photochemist Philip Albert Leighton’s book Photochemistry of Air Pollution (1961). In a book review, the eminent physical chemist Henry Eyring quoted Leighton: “a major share of the photochemically originated organic particulates in photochemical smog are due to the nitrogen dioxide-olefin photolysis and the reactions which follow”, (Eyring, 1962). However, Eyring was not entirely convinced this was the complete story and believed that “many features will undoubtedly be modified and amplified with time.”  Another reviewer Morris Katz realised the regulatory significance of the chemistry: “in order to control such harmful by products… [we need to] know the facts concerning their formation and reactions” (Katz, 1961).

​We now know that hydroxyl radicals play a pivotal role in the formation of smog. Altshuller and Bufalini (1971) consider that our current understanding of smog emerged in the late 1960s. Stern’s Air Pollution, 2nd edition, 1967-1968 mentions peroxides but not a role for the hydroxyl radical in smog formation. Hiram Levy II (1971) identified the hydroxyl radical as a basic ingredient for the production of photochemical smog. Reactions of OH with CO were also appreciated to be significant (Westberg and Cohen, 1969). A lack of a clear understanding of smog chemistry and the importance of the reactivity of individual hydrocarbons meant that a number of mistakes were made in finding solutions to air pollution problems, perhaps most notably in Mexico City in the 1980s. 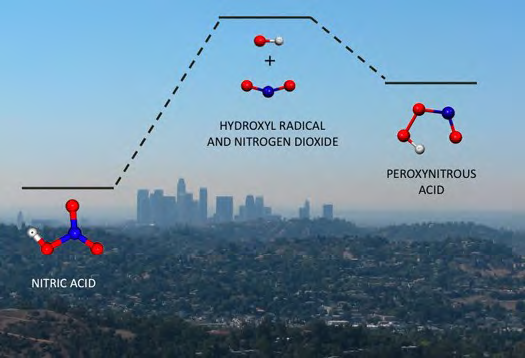 Nitrogen dioxide and the hydroxyl radical combine in the atmosphere (e.g. Los Angeles) to make either nitric acid or peroxynitrous acid; the so-called branching ratio of these two chemicals is important in mod-els of ozone production, and influences smog formation. Mollner, A. K.; Bloss, W. J. et al., Science, 2010, 330, 646.
​Problems posed by smog – scientific, legislative, and financial – have proved difficult to solve, but chemistry has contributed to the way air quality is managed in a world where air pollution issues have become more complex.  This has meant that a careful approach to regulation has achieved impressive results (Parrish et al., 2011).  It is important to note that Arie Jan Haagen-Smit, who recognised the origin of the smog, also addressed the implications that smog has for policy, showing that good chemists are not as removed from the world around them as some detractors might imagine.

This article is based on a presentation by Professor Brimblecombe at the joint ECG/Historical Group Symposium ‘Environmental Chemistry: A Historical Perspective’ held at Burlington House on 26th October 2011.