Samples once deemed “clean” turn out to contain thousands of different chemicals. In some cases, these chemicals are not new to science; rather, developments in toxicology identify new hazards at a subcellular or chronic level, making these chemicals of emerging concern. Probably the best-known example is dichlorodiphenyltrichloroethane (DDT), which was used extensively as a pesticide for several decades until Rachael Carson alerted the world to the potential risks. Fifty years later, discussion continues over the use of this chemical. Although banned in most countries, DDT is still used in some developing countries to fight malaria because it is such an effective pesticide; yet exposure can result in severe human health impacts and damage to the environment (2).

Similar discussions are also underway over a new group of POPs: halogenated flame retardants. Various flame retardants have been used throughout human history, but flame retardants developed during the last century are manufactured on a scale large enough to pose a significant risk to the environment. Recent toxicological and analytical developments have identified the use of some of these organic flame retardants as a potential environmental concern. There is a debate as to whether the safety benefits from halogenated flame retardants outweigh the environmental risks as they are persistent, toxic and accumulate in humans and wildlife (3). PCBs were first manufactured and applied as flame retardants during the late 1920s. From the 1960s onward, several other chlorinated compounds, such as tris(2,3-dichloropropyl) phosphate (TDCPP) and tris(1,3-dichloroisopropyl) phosphate (TDCIPP) were used, followed by an increasing number of brominated flame retardants (BFRs), such as polybrominated biphenyls (PBBs) and polybrominated diphenyl ethers (PBDEs). Following EU legislative measures and the inclusion of BDE formulations among the Stockholm Convention POPs, production and use of these substances have been phased out as they are replaced with supposedly safer alternatives. However, many of these replacements are chemically very similar to the substances they replace and are now being identified in environmental samples.

​Many traditional analytical methods to measure POPs involve targeted analysis that only identifies specific compounds. Thousands of other chemicals in the sample go unmeasured. Non-targeted analysis allows screening for the presence of many different potential pollutants at the same time. This can lead to better risk assessment and more informed decision making, which can drive more effective legislation. The following two sections present complementary analytical techniques that highlight the benefits of non-targeted chemical analysis in the search for new and emerging POPs of environmental concern.

Multidimensional chromatography
Multidimensional gas chromatography, such as comprehensive two-dimensional gas chromatography (GC×GC), combines two gas chromatography columns of different phases using a modulator. This modulator traps compounds from the first column and reinjects them in a very tight band onto the second column, where further separation occurs. Enhanced separation is achieved because compounds are subjected to two independent separations that can significantly increase selectivity and sensitivity while reducing analysis times by eliminating injections on multiple chromatographic phases (4). After separation, halogen-selective detection techniques such as electron capture detection (ECD or micro-ECD) can be used for targeted analysis of POPs. However, a more selective and complete detection method such as time-of-flight mass spectrometry (TOFMS) is preferable for the identification of new compounds.
The advantage of mass spectrometry is that it provides more diagnostic information for each peak; chlorinated and brominated compounds can comparatively easily be recognized by their characteristic isotope patterns because of the high natural abundance of the 35Cl/37Cl and 79Br/81Br isotopes. With GC×GC-TOF MS, thousands of individual compounds can be simultaneously detected in a single environmental analysis. However, sample processing can become an extremely tedious task. By narrowing down the detection strategies for the early identification of halogenated compounds, both data interpretation and processing times can be greatly minimised. One valuable technique for the classification of specific compound classes is the use of pre-defined mass spectral scripting filters to look for the characteristic chlorine and bromine isotope patterns (Figure 1). 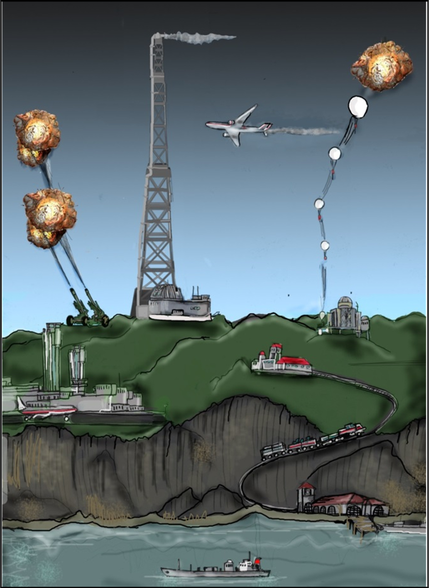 Figure 1. Isotopic contribution of bromine and chlorine in compounds containing three halogens.
​​An example of the successful use of GC×GC and mass spectral scripting tools was the identification of a novel mixed halogenated carbazole in rural sediments of Ontario, Canada (5). The MS script developed by Pena-Abaurrea et al. was able to recognise a generic isotope pattern that enabled the simultaneous detection of chlorinated, brominated, and mixed halogen-substituted compounds in a single classification. Among the hundreds of thousands of potential chemicals identified in the sample, the script function identified a particularly prevalent and apparently novel contaminant. The mass spectral fragmentation pattern showed losses of chlorines and bromines, and the odd molecular weight suggested the presence of at least one nitrogen atom in the molecular structure. Additional experiments using high-resolution MS techniques, aided by synthesis of suspected standard solutions of the proposed molecular structure, confirmed the identity of the unknown chemical as 1,8-dibromo-3,6-dichlorocarbazole. This previously unknown carbazole eluted at the same first dimension RT (1DRT) as an octa-PCB, and had a molecular ion cluster at m/z 393 that matched with a fragment observed in the mass spectrum of the octa-PCB (Figure 2). It may therefore have been masked in previous one-dimensional analysis by the octa-PCB, as the chromatography and low-resolution mass spectrometer would have been unable to distinguish the two compounds. Based on the structural similarity of the new chemical with well-known POPs, in particular dibenzofurans, the authors carried out toxicological tests. The toxicity of the carbazole was comparable to that of the hepta- and octa-chlorinated dibenzofurans and non-ortho PCBs. The carbazole was recorded in the sediment in concentrations similar to or higher than the sum of marker PCBs, making it environmentally relevant (5). 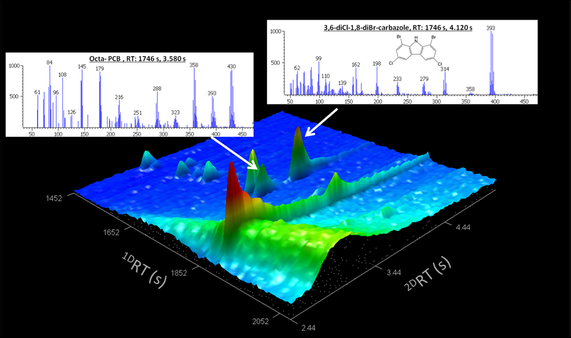 Figure 2. This two-dimensional chromatogram from an Ontario sediment sample shows the separation of 1,8-dibromo-3,6-dichlorocarbazole from an octa-PCB with the same 1DRT and same isotope cluster (5).
The source of this new contaminant is not clearly understood. Only two papers have proposed hypotheses about the release of carbazoles to the environment; each points to a different anthropogenic and natural origin (6, 7). The identification of this novel compound would not have been possible with standard single dimensional chromatography and low-resolution MS, highlighting the effectiveness of multidimensional chromatography and high-resolution MS to identify new and emerging persistent organic pollutants of environmental concern.

Ultra high resolution MS
After a chromatographic separation of analytes in a sample, detection is usually carried out by conventional high-resolution (with a resolution of 10,000), time-of-flight or tandem MS. These approaches are widely used to analyse legacy pollutants such as PCBs, polychlorinated dibenzo-p-dioxins, furans and pesticides. Unfortunately, these targeted methods do not take into account the presence of other unknown compounds with a potentially negative environmental impact. In the cases of dioxins, PCBs, and other related aromatic POPs, the corresponding mass spectra are very alike, and because these chemicals are so similar they often have similar retention times on a GC column. If chromatographic techniques cannot separate these compounds and low-resolution mass spectrometry is used, it will not be possible to distinguish the different ions; many compounds will go undetected and may be falsely recorded as one compound. Therefore, in the search for new and emerging contaminants of concern it is important to have a high mass accuracy to be able to distinguish different compounds of a similar mass.

Instruments such as the Orbitrap mass spectrometer or Fourier transform ion cyclotron resonance mass spectrometer (FTICRMS) can differentiate nominally isobaric ions with very similar exact masses. These ultrahigh resolution techniques (with a resolution >500,000) provide an excellent mass accuracy, which can be used to assign elemental compositions of the detected ions based on their exact mass. To date, FTICRMS is still the gold standard in terms of mass resolution and mass accuracy, making it a very powerful tool for the study of unknown compounds. The FTICRMS consists of a superconducting magnet refrigerated by liquid helium, offering magnetic fields between 3 and 12 Tesla. After an optional liquid or gas chromatographic step, analytes are ionized and accumulated in a hexapole for 0.5 to 2 seconds and sent to the magnet in packages. The ions are then excited by a radiofrequency, forcing them to spin in phase with a period that depends on the mass of each ion. When these ions get closer to the detector plates while spinning, a current is generated in a given frequency. The sum of all frequencies combined is finally deconvoluted applying the Fourier transform, and individual frequencies corresponding to each ion are converted to exact masses (8).

Due to the ultrahigh resolution of FTICR, the resulting mass spectra can be extremely complex, containing several thousands of peaks. One way to facilitate the visualization of these results and search for new persistent organic pollutants is to use mass defect plots. In these plots, each exact mass is plotted against its mass defect (exact mass minus nominal mass). Moreover, mass (which is expressed in the carbon scale, with an exact mass for carbon of 12.0000) can be converted to different mass scales to isolate and align series of structurally related compounds in the plot. Two of the most common mass scales for mass defect plots are the Kendrick mass scale (where CH2 has an exact mass of 14.0000, thus aligning series of hydrocarbons) and the H/Cl scale proposed by Taguchi et al. (9) (where the exact mass of the exchange of a hydrogen by a chlorine atom is 34.0000, thus aligning families of halogenated compounds such as PCBs or dioxins).

An example of the successful use of ultrahigh resolution MS with mass defect plots was the discovery of several previously undiscovered contaminants, including chlorinated polycyclic aromatic hydrocarbons and mixed halogenated analogues of the flame retardant Dechlorane 604, in Lake Ontario Trout (Figure 3) (10). Traditional chlorinated compounds such as PCBs, DDT and dioxins are recognised contaminants in great lakes fish and as such are routinely monitored. The discovery of Dechlorane 604 trout was surprising, as this compound has a low potential for bioaccumulation. This finding has opened the question as to how the Dechlorane 604 analogues were produced, maybe through degradation in the environment or through a metabolic process in the fish. It also creates the need to establish if these newly identified contaminants are widespread, toxic and bioaccumulative which would make them contaminants of emerging environmental concern.

Figure 3. Expanded view of the mass defect plots using the H/Cl and mass scale obtained from a sample of an extract of Lake Ontario lake trout. Reproduced with permission from reference 10. Copyright Springer-verlag, Berlin, Heidelberg, 2013.
​Conclusions
There are hundreds of thousands of potential chemicals of environmental concern and this list is continuously changing. Furthermore, these chemicals are released in a dynamic natural environment, where biogeochemical processes such as biodegradation, metabolism and photolysis can change these chemicals and produce new ones. It is thus a substantial challenge to identify which are the pollutants of concern. The two non-targeted analytical techniques presented here have proven to be highly effective in the search for new and emerging persistent organic pollutants of environmental concern.

Acknowledgements
The authors thank Karl Jobst (Ontario Ministry of the Environment and Climate Change) and Sean Comber (Plymouth University) for their constructive comments on this article. Miren Pena thanks Conservation Ontario for financial support with the Southern Ontario Stream Sediment Project (SOSSP) project.