Eugenia Valsami- Jones
University of Birmingham
e.valsamijones@bham.ac.uk
ECG Bulletin January 2016
Nanotechnology is proliferating in all aspects of modern life. Novel nanometre-scale materials are used in every-day products from cosmetics and medicines to fitness and food products. Research into the safety of these materials is lagging behind their technological applications, leading to concerns that products become available without due environmental and human health safety considerations. Furthermore, research into nanomaterial safety is marred by controversy. Consensus is lacking on laboratory methodologies, long-term studies are few, and approaches to develop nanomaterial groupings and models of activity are in their infancy. Thus, nanomaterials, despite their small size, are the source of big trouble.

It has been more than 10 years since the term “nanosafety”, describing research into the potential health and environmental threats from nanomaterials and the development of safer alternatives (“safe by design”), became a regular feature of the scientific literature. Key to the recognition of the need for such research was an authoritative report published by the Royal Society and the Royal Academy of Engineering in 2004 (1), which presented in technical detail concerns about the risks of nanotechnology, particularly free engineered nanomaterials. Other major reviews followed, including EPA’s Nanotechnology White Paper in 2007 (2) and a report by the Royal Commission on Environmental Pollution in 2008 (3) that described the issues and lack of progress since the RS&RAE report (1). In 2012, the Royal Society of Chemistry published its own review of nanosafety, particularly focussing on the difficulties in developing legislation in the lack of sufficient and sound scientific evidence (Figure 1) (4).
Additional costs between €6 million and €38 million per nanomaterial are expected for the 450 to 1,800 surface-treated nanoforms (variants around a common core material), leading to total costs of up to €600 million to be borne by industry, mostly (around 80%) small and medium-sized enterprises (5). Development of a framework that would enable grouping and read-across approaches validated for nanomaterials is therefore a major research priority.

To establish mechanisms of uptake, we have used pharmacological inhibitors to block specific uptake pathways that have been implicated in the transport of metal nanoparticles and aqueous metal forms. This study, which focused on the mud snail Peringia ulvae, showed that nanoparticulate silver is taken up via multiple pathways and that these pathways are simultaneously active (11).
More recently, we have monitored in detail the cellular uptake of titania (TiO2) nanoparticles into A549 (human epithelial) cells. This work demonstrated that the surface chemistry of nanomaterials plays a critical role in their cellular internalisation (Figure 3). 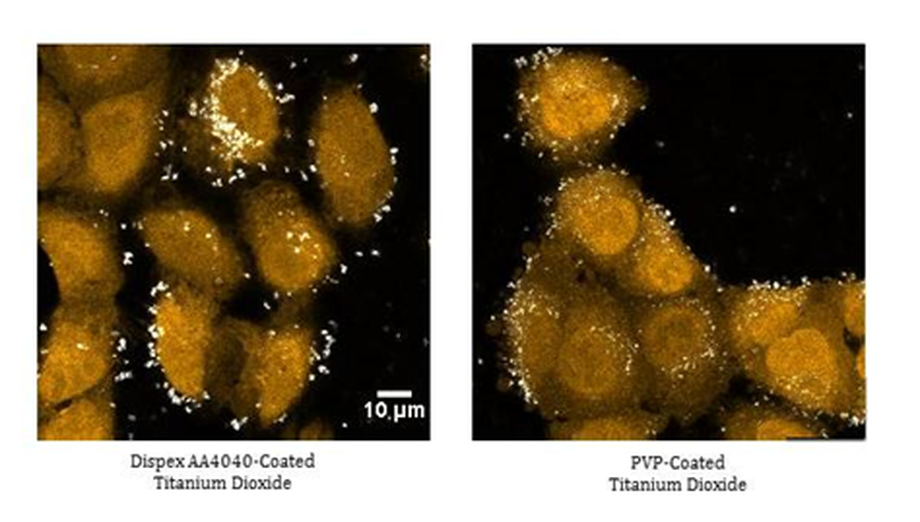